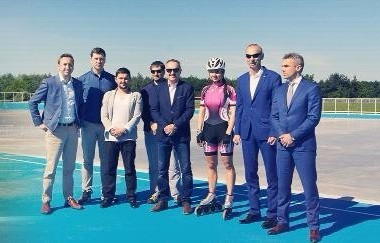 A delegation, including IWGA President José Perurena, vice-president Max Bishop and Gossow, visited the Polish city due to the host the event between July 20 and 30.

The team were notably "impressed by the attention to detail being given to the Opening Ceremony" scheduled take place at the Wrocław Stadium.

The rink for inline-hockey and artistic roller sports is set to be completed in a fortnight.

Perurena was invited to visit the renovated Olympic Stadium, the venue for American football and speedway.

"The Organising Committee showed huge progress in many areas since our last Coordination Commission meeting in December 2016," said Gossow.

"The different working meetings with IWGA staff and The World Games 2017 service partners that have taken place since then have been fruitful and have supported the Organising Committee in their efforts."

In attendance for Wrocław 2017 were President Marcin Przychodny and vice-president Adam Roczek.

The Deputy Sports Minister of Poland, Jan Wider, also attended, along with representatives from the Polish Olympic Committee.

Another discussion point was the design of the Games' medals.

It has been announced that they should be finished shortly, with the design then to be made public.

Around 4,000 athletes from 31 sports and more than 100 countries are expected to participate in Wrocław

A record 111 countries are due to compete, with the Games featuring sports and disciplines not on the Olympic programme.

The number is eight more than the previous highest turn-out for the event in 2013 when the World Games were held in Cali in Colombia.

It continues the record-breaking participation trend as the 2009 World Games in Kaohsiung in Chinese Taipei were attended by 84 countries.