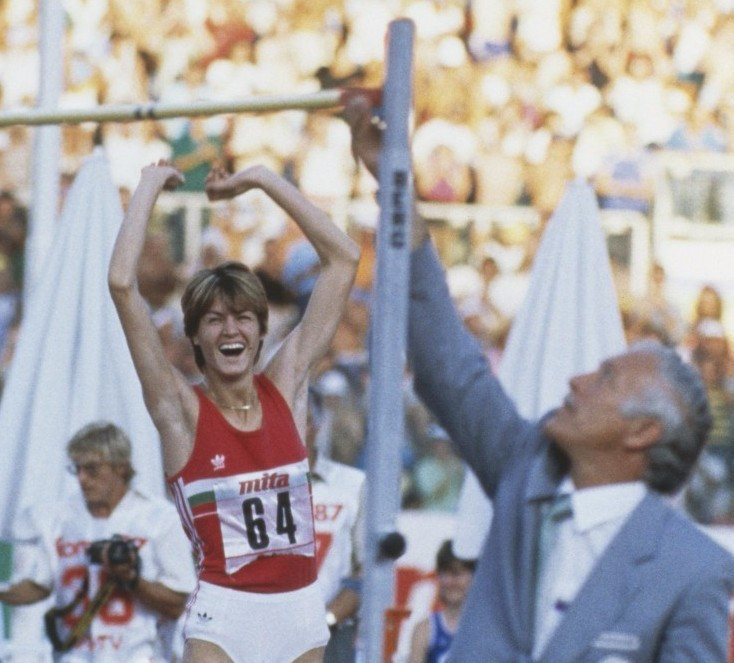 Kostadinova's record in the high jump event of 2.09 metres, set at the World Championships in Rome in 1987, still stands but is one of the marks under threat as a result of the plans.

The 52-year-old, President of the Bulgarian Olympic Committee since 2005, criticised the proposals and said records could not be taken away from athletes "without justification".

In a bid to restore credibility in the sport, European Athletics have proposed to scrap records set prior to 2005.

The International Association of Athletics Federations (IAAF), who would need to approve resetting world records, has only stored blood and urine samples since then.

If they are passed, world records would only be recognised if they adhere to strict new criteria.

"I find the proposal for revision and eventual cancellation of world records incorrect and even mocking," Kostadinova, the Olympic gold medallist at Atlanta 1996, told insidethegames.

"It is frivolous, incorrect, even mocking our work to delete everything that has happened so far in history.

"And why no-one other than European Athletics does that?

"This is not just about me, but for everyone who honestly and with hard working achieved something significant on a global scale, they have recorded their career peak and that is also a peak in human achievement.

"Yes - for proven breaches and wrongdoers let there be sanctions and cancellations, but why should the others suffer?

"When I set records I was congratulated, now the same people want to take them away."

"I remember just how Svein Arne Hansen congratulated me and embraced me when I was victorious in Oslo, where I still hold the record of the Bislett tournament with 2.05m since 1987," she said.

"Then Hansen was the director of the tournament and he was more than happy with my result.

"How then I was a hero, and now they are subjecting me to revisions and doubts?"

The changes have largely been met with a blacklash from some of the sport's former leading names, including Denmark's Wilson Kipketer and British trio Paula Radcliffe, Jonathan Edwards and Colin Jackson, who all stand to lose their records should they be approved.

American Mike Powell, whose long jump world record of 8.95m, set at the 1991 World Championships in Tokyo, when he beat Bob Beamon's legendary record that had stood for 23 years, also slammed the move.

The double Olympic medallist told the BBC World Service the proposals were "disrespectful, unjust and a slap in the face".

"They would be destroying so many things with this decision, without thinking about it.

"Regardless of what happens, I am going to fight."

Dutch sprinter Dafne Schippers, the world 200 metres champion and Olympic silver medallist, is among those to have backed the plans, however.

The 24-year-old said it was positive that some records, especially those set in the 1980s, could be erased.

"The difficult thing is that everyone knows that the 1980s are not the best years in track and field yet most of the world records are from the 1980s," she told British newspaper the Daily Mail.

"I think it's really good if we can skip that period and have a cleaner sport.

"Some of those world records - they are just too difficult to run for that period.

Current marks which do not adhere to new criteria laid out by European Athletics - which includes proposals that records can only be set by athletes who have had an agreed number of doping control tests in the previous 12 months - would remain on the all-time list but would not officially be recognised.

Other proposals include ensuring records at senior level can only be set in a "restricted set of high-level competitions" where the IAAF can have "complete confidence" in officials at the event.

European Athletics' recommendations will now be put forward to the IAAF for consideration.

IAAF President Sebastian Coe, whose own 1,000 metres and 4x800m marks could be at risk as part of proposed new criteria, has given his full support to the move.

The Briton told BBC London today that he "looks forward to maybe counter proposals and maybe changes, maybe thoughts around it".

"We have to start somewhere," added Coe, who called for a "global debate" on the issue.

"This is a debate the athletes have prompted the administrators to have for far too long."

Athletics Australia were one of the first governing bodies in the sport to react to the news.

In a statement, the organisation refused to back the move.

They admitted the proposals were "in principle, a step in the right direction for ensuring the validity of an athlete's performance now and into the future" but claimed they were concerned of the affect on those who may have their records wiped.

"However, it is crucial that any changes implemented retrospectively seriously consider the impact on the countless number of athletes who have achieved their world or area record by completing clean and adhering to the rules," read the statement.

"We would not want the outstanding achievements of these athletes to be impacted.

"That would be an injustice."