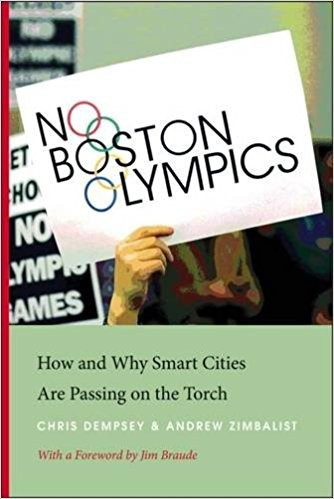 Campaigners who forced Boston to drop its bid for the 2024 Olympic and Paralympic Games are to publish a book next month.

It is due to be published at a special event in Boston on April 28.

The book "provides a behind-the-scenes look at how an ad hoc, underfunded group of diverse and engaged citizens joined together to challenge and ultimately defeat Boston’s Olympic boosters, the USOC (United States Olympic Committee), and the IOC (International Olympic Committee)", the authors promise.

The USOC instead appointed Los Angeles as it candidate city.

Dempsey now exports his powerful anti-Olympic message and was involved in the campaigns by citizens in Hamburg, Rome and Budapest that killed their bids for 2024.

"The book explains why smart cities are increasingly saying 'No, thanks' to the idea of hosting the Olympics," promise the authors.

"Since Boston dropped its bid in July of 2015, Hamburg, Rome, and Budapest have all dropped their bids for the 2024 Summer Games.

"The IOC is left with just two bids - Paris and Los Angeles - the fewest number of bidders for a summer Games since the 1970s."