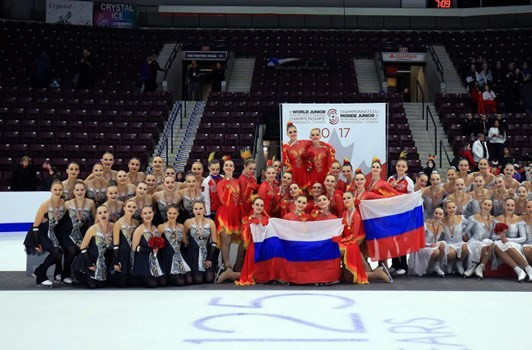 Team Junost found themselves in second place after yesterday’s short programme, but scored 106.49 points in today's free skating for an overall winning total of 168.83 points.

That allowed Finland’s first and second teams, Fintastic and Musketeers, to each move up a place and claim the silver and bronze medals respectively.

Fintastic repeated their silver medal-winning performance from 2015 with 158.06 points, despite ranking sixth in the free skating with 96.51.

Defending champions Musketeers finished fifth in the free skating with 98.52 points and rose up to third overall with 156.24.

Skyliners, the United States’ first team, came second in the free skating with 101.73 points but missed the podium narrowly with 156.06.

The 2017 World Junior Synchronised Skating Championships was the first to be held since the ISU passed a ruling to stage the event on an annual rather than biennial basis.

A total of 19 teams representing 14 ISU member countries competed in the third edition.