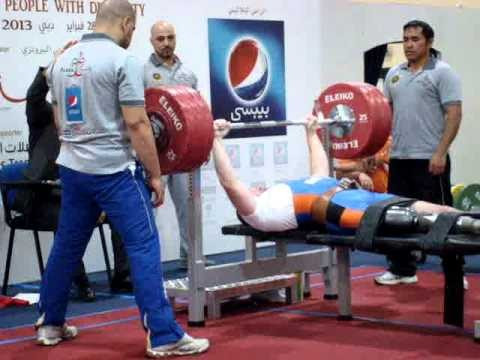 Patrique Dankers of The Netherlands claimed his best-ever Powerlifting World Cup finish as he won the men's up to 88 kilograms event in Dubai today.

In what proved to be a closely-fought competition, Dankers beat world champion Mutaz Aljuneidi of Jordan on bodyweight after both athletes produced one good lift of 190kg.

The Dutchman topped the podium due to him weighing less than Aljuneidi, who was forced to settle for the silver medal.

Bronze went the way of Iraq's Salam Alshakkakee, who managed a best attempt of 181kg.

The Jordanian lifter will be hoping to get revenge on Dankers during September's World Championships, where he will bid to defend his title.

Dankers, also a Dutch European Open bronze medallist, lifted a personal best total to reign supreme in Dubai, with the World Cup win representing the best of his career to date.

Enkhbayar recorded good lifts in all three of his attempts, beginning with 210kg before elevating his total to 211kg.

His third lift yielded 220kg, which proved to be more than enough for him to claim the gold medal.

India's Sachin Chaudhary lifted 200kg to earn his career-best performance as he clinched silver, while Ukraine’s Yurii Kupriianov beat Iraq's Abbas Naisan by just 1kg with a lift of 193kg.

China’s Miaoyu Han marked her international debut in style as she sealed gold in the women's up to 73kg weight category.

The 28-year-old replicated the feat of Enkhbayar with three good lifts as she finished with a best of 113kg, 6kg more than eventual silver medallist Iman Hafez of Egypt.

Turkmenistan's Asian Open bronze medallist Mayagozel Ekeyeva was third on 106kg, losing out on silver by a narrow margin.