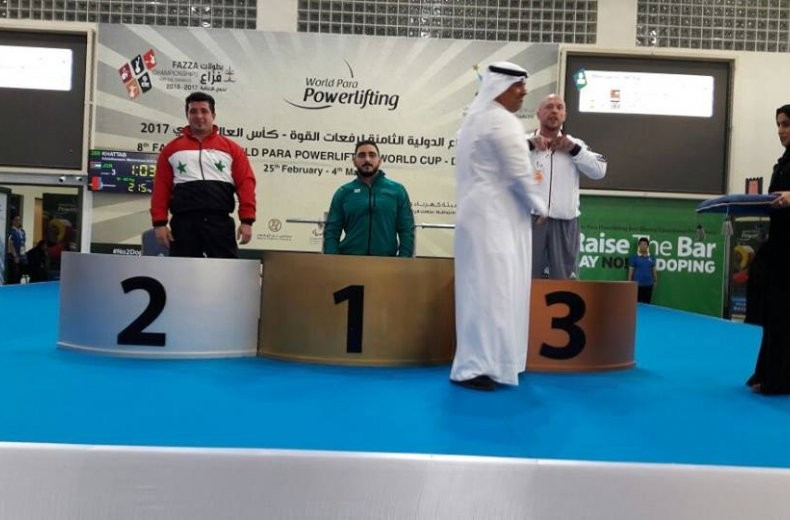 Khattab topped the podium after he cleared 210kg, with Syria’s Shadi Issa the only lifter in the category to complete three lifts at the Dubai Club for the Disabled.

Issa managed 188kg to take home the silver medal, while Michael Yule of Britain's lift of 185kg was enough for the bronze.

Khattab had attempted to go five kilograms higher with his third attempt but fell short with the title already secure.

It was Jordan's third gold medal of the event following victories for Mohammad Tarbash and Omar Qaradeh in the up 59kg and up to 49kg categories respectively.

Rasool Mohsin of Iran, silver medallist at last year's Paralympic Games in Rio de Janeiro, dominated the men's up to 72kg competition and comfortably claimed the gold medal with a best lift of 210kg.

The world record holder needed just one good lift at the weight for victory, with Turkmenistan’s Sergey Meladze earning silver on 185kg.

Thailand’s Thongsa Marasri lifted the same total as Meladze but was pushed down to third spot by virtue of a heavier body weight.

Tetyana Shyrokolava added to Ukraine's haul from the event in Dubai as she proved too strong in the women's up to 61kg competition.

Following team-mate Mariana Shevchuk returning to the scene of her doping controversy last year to claim the gold medal in the up to 55kg event yesterday, Shyrokolava continued the impressive display from the nation with a lift of 100kg.

Fatema Alhasan lifted 91kg in her opening attempt to take the silver medal, while Egypt’s Fatma Korany registred 82kg to earn bronze with her last effort.

The event in Dubai is due to continue tomorrow with with the men’s up to 88kg and up to 97kg and the women’s up to 73kg competitions.