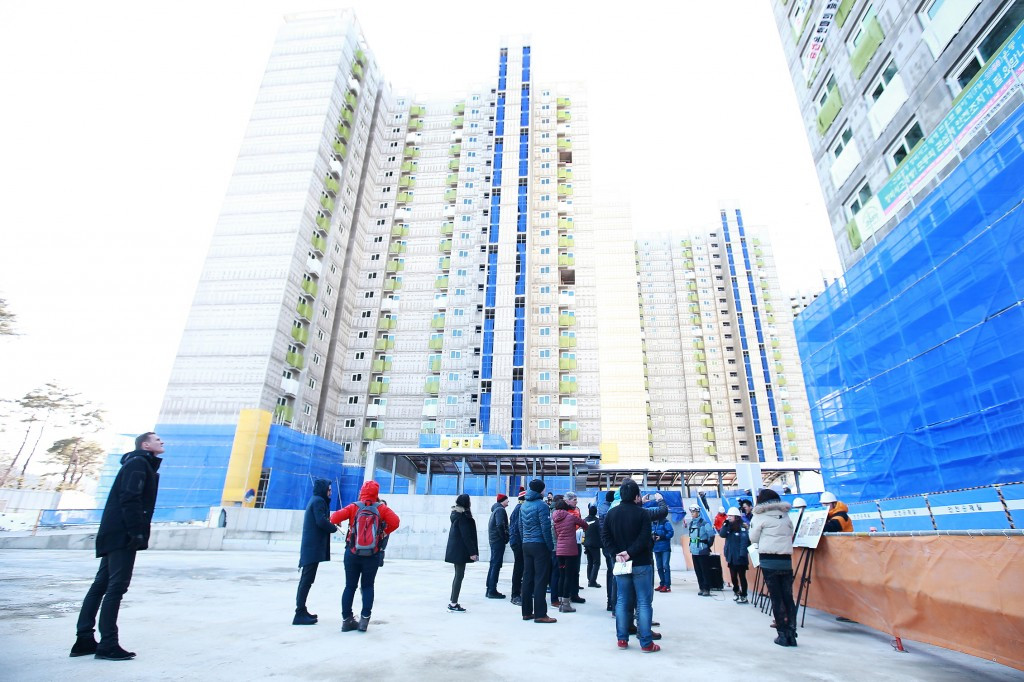 It comes with exactly a week until the one year anniversary until the Opening Ceremony of the Winter Olympic Games.

A total of 132 NOC delegates are visiting the South Korean county for a three-day session in which they are inspecting venues while also receive presentations on Games-time operations and services.

"Everyone was really impressed by construction progress of the venues as well as the compact nature of the clusters," one individual present told insidethegames.

"However, there were some serious concerns raised regarding accommodation and transport."

One aspect related to a lack of hotels in mountain clusters which could mean that vital team officials and coaches will have to stay in the Gangneung coastal cluster.

Rooms in the Athletes’ Village are already thought to be too small for any more people to be added.

Mobile housing is thus being considered one alternative option.

Accommodation is thought to be particularly scarce at the Bokwang cluster where freestyle skiing and snowboard events will take place.

The IOC has also admitted that travel times from accommodation may be "longer than expected" for some groups.

Transport concerns relate primarily to the high-speed railway connection between Incheon International Airport, Seoul and the Pyeongchang region itself.

At present, athletes are due to travel on the high-speed railway once arriving in South Korea while their luggage and equipment will follow in logistics trucks.

Accredited personnel such as media and other officials are also expected to use the connection - which should reduce four hour journey times by half - as well as spectators.

There are therefore concerns that more than the expected capacity of 20,000 people per day could attempt to make the journey.

With the last trains due to leave Games venues at 11pm, there are also worries over how spectators watching sport finishing later in the evening will be able to return to Seoul.

This is a particularly poignant because the lack of hotel space in both mountain and coastal clusters means some spectators, including family and friends of athletes, could be forced to make the journey north-east from the South Korean capital each day.

The railway is due to be completed in June but is not scheduled to be fully open to the public until December.

This creates a sense of déjà vu after the high-speed railway connecting the main Olympic Park in Barra de Tijuca with the city centre in Rio de Janeiro opened just the month before last year’s Games began.

There is more time for testing on this occasion but there is also a far greater reliance on the railway link for all personnel attending the Games.

insidethegames understands that some of the world's leading winter nations were among those to raise concerns during the Seminar.

On the other hand, logistical problems such as transport are invariably a concern before a Games and South Korean organisers still have plenty of time to make the required changes.

Anticipated problems before the London 2012 and Sochi 2014 Games did not truly materialise.

“The need for more accommodation for Officials in the Mountain Cluster was raised during the meeting,” a Pyeongchang 2018 spokesperson explained to insidethegames.

“Pyeongchang 2018 plans to propose a solution to the IOC within the next few weeks.

“For transportation, Pyeongchang 2018 is evaluating and analysing different arrivals and departures processes for various client groups, including spectators, during the peak times.

“Sport equipment will be transported from the airport directly to venues in logistics trucks.”

Pyeongchang 2018 have still not published their Organising Committee budget for 2017, something which was initially due to be completed by October or November before being pushed back to January.

Bid officials claim it is unaffected from the ongoing political crisis in South Korea which has seen impeachment proceedings opened against South Korean President Park Geun-hye due to her involvement in a cronyism scandal.

Other challenges with one-year-to-go involve promoting the Games both domestically and internationally as well as finalising legacy plans at each venue.

“One of the reason we hold the Chef de Mission Seminar is to identify potential issues and find solutions,” the spokesperson added.

“We are confident that these conversations will be constructive in better shaping our operation plans.”

The IOC also admitted that accommodation, in particular, was a concern.

“The Chef de Mission meeting allows the Chefs to understand the Games project more fully and to raise any possible issues, so that, if necessary, solutions can be found," a spokesperson told insidethegames.

"On transport, we are confident that Pyeongchang 2018 and the Republic of Korea will deliver a solid transportation system with the new high-speed train and new roads expected to be fully ready ahead of the Games.

"On accommodation, conditions have changed since the candidature with fewer properties in the mountains materialising than expected.

"Pyeongchang 2018 is working on a solution for accommodation in the mountains but some travel times for some groups may be longer than initially expected.”