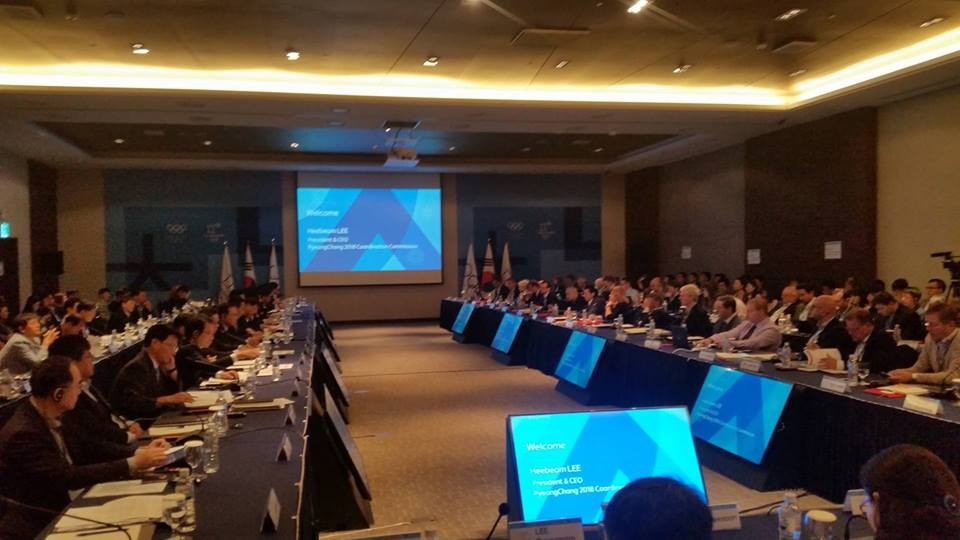 Pyeongchang 2018 organisers have been warned that they risk harming the image of their Olympic Games if they do not make swift improvements to both legacy plans and communications and engagement strategies.

This message was delivered by International Olympic Committee (IOC) Coordination Commission chair Gunilla Lindberg in an opening address which abandoned the usually anodyne language displayed on these occasions.

After praising organisers for their "impressive" construction progress, the Swede warned an Organising Committee team headed by new Pyeongchang 2018 President Lee Hee-beom that completing venues is "only one part of the job".

Lindberg added: "Concerning venues, it must also be a top priority for Pyeongchang 2018, Gangwon Province and the Central Government to confirm the legacy plan for each venue.

"Decisions in this respect have been delayed for too long and decisions must be made.

"The current lack of clarity in this respect is having a negative impact on pre-Games operations and signature of the necessary use agreements with venue owners, which are both significantly delayed.

"Absence of clear legacy plans also reflects badly on the image of these Games for which legacy were already committed at bid time but never confirmed."

Lindberg warned that communications and engagement must be a "key focus".

She added: "Early indicators show that the level of interest from Koreans and stakeholders is low.

"It is essential to raise the profile of Pyeongchang 2018, both domestically and internationally, to generate more interest and enthusiasm.

"Failure in this area will lead to failure in many other areas, including ticket sales."

These were two of 10 themes considered "particularly important" to discuss over the next two days.

Other challenges concerned Games services, where "there is a lot of work to be done...especially with regard to transport, accommodation, and arrivals and departures".

Moving all stakeholders between Seoul and Pyeongchang County by the new high speed railway link due to be completed next year was described as a "complex undertaking which cannot be underestimated".

A busy winter of test events was also hailed both as "your time to show the world that Pyeongchang 2018 can deliver and generate excitement for the Games", as well as a "unique opportunity to test your teams and gain precious experience ahead of the Games".

Recruiting the right workforce was cited as another priority, as well as completing overlay procurement work at venues which, if not undertaken, will "risk" their successful delivery.

Confirming a "realistic...budget" so that "any gap can be identified as soon as possible and necessary mitigation measures implemented" was also prioritised, along with implementing a "strong ticketing programme" and a "full stadia strategy".

Implementing an efficient governance structure and ensuring a clear strategy for venue accessibility at the Paralympic Games were the final two points.

Many of these 10 were areas perceived as problematic during the Olympic Games in Rio de Janeiro in August.

It, therefore, appears that the IOC are keen to make their concerns known - both in private and public - in order for them to be addressed with less than two years to go.

Lindberg, a member of the IOC Coordination Commission for Rio 2016, did speak enthusiastically about construction progress and other elements.

"We could see the positive progress that Pyeongchang 2018 has made with construction projects during our venue tours yesterday," she said.

"Pyeongchang 2018 is on course to deliver permanent venues on schedule.

"I also want to congratulate you on the success of your volunteer recruitment programme, and what appeared to be a very festive 500-days-to-go celebration.

"We now have just 491 days to go, and every day that goes reduces our margin for error in this final stage of Games preparations."

The three-day IOC Coordination Commission inspection - the first since Lee Hee-beom replaced Korean Air boss Cho Yang-ho as President in May - will continue with meetings here today and tomorrow.