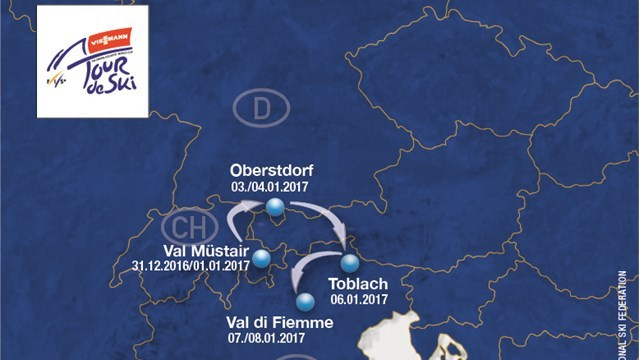 Organisers will be hoping that the focus returns to sporting performances rather than doping controversies when the Tour de Ski stage-race begins in the Swiss resort of Val Müstair tomorrow.

The seven-stage format will take the world's best skiers across three countries in a competition which is also an important stop on the International Ski Federation (FIS) World Cup calendar.

It will begin just 24 hours after the FIS rejected the appeals of six Russian skiers who have been suspended after being linked to doping manipulations at Sochi 2014, which were mentioned in the McLaren Report.

After starting with a sprint free prologue on New Year's Eve, both male and female fields will race in a mass start distance classical format on Sunday (January 1).

They will then move to Oberstdorf in Germany for skiathlon and a distance free technique pursuit on Tuesday and Wednesday (January 3 to 4).

Further individual and mass start will then be held in the Italian resorts of Toblach and Val di Fiemme on January 6 and 7 before the event concludes with a climb free technique pursuit on January 8.

In the men's event, Norway's Martin Johnsrud Sundby will be seeking to emulate a superb performance in the 2016 edition which saw him win by 3min 15.70sec over fellow countryman Finn Hågen Krogh.

Sundby also finished first in the 2015 Tour de Ski before being stripped of his title after a positive drugs test.

He was also handed a two-month ban and stripped of his 2014-15 World Cup title earlier this year following two failed tests for asthma medication salbutamol.

Sundby claimed to have received the wrong advice from a doctor on what dosage he should take and was initially cleared of any wrongdoing by an FIS tribunal, only for the World Anti-Doping Agency to successfully appeal to the Court of Arbitration for Sport.

Therese Johaug will be unable to defend her women's title as she remains suspended from competition after testing positive for banned anabolic steroid clostebol in September, which she claimed to have used inadvertently via a sun cream she was given by her doctor.

Fellow Norwegian Heidi Weng will start as favourite after leading through the first part of the World Cup season.

But the build-up has been overshadowed by the suspension of Russian skiers implicated in the McLaren Report on the manipulation of doping samples at events including Sochi 2014.

Olympic 50km freestyle champion Alexander Legkov was among those to appeal the ban in order to compete at the Tour de Ski.

But the FIS have rejected appeals from all six athletes sanctioned.

"After receiving written submissions from the athletes and the response from FIS, the FIS Doping Panel made the unanimous decision today to uphold the provisional suspensions of the Russian Cross Country athletes, Evgeniy Belov, Julia Ivanova, Alexander Legkov, Evgenia Shapovalova, Alexey Petukhov and Maxim Vylegzhanin," they said.

"The reasons for the Panel’s decision will be communicated directly to the athletes in due course.

"As a result of the decision, all of the above mentioned athletes may not take part in any competitions or national team activities."