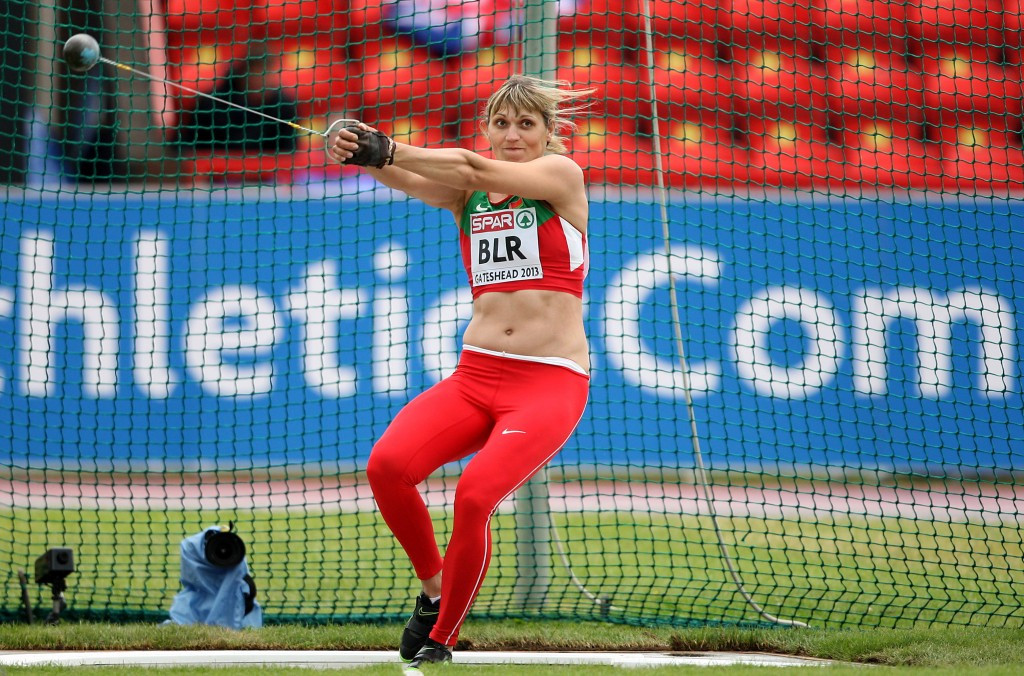 Aksana Miankova of Belarus will be stripped of the Olympic hammer throw gold medal she won at Beijing 2008 after she was among the seven latest athletes to be sanctioned by the International Olympic Committee (IOC) as part of their ongoing retesting of samples.

The 34-year-old's sample from the Games in the Chinese capital tested positive for two prohibited substances - turinabol and oxandrolone.

Her seventh-place result from London 2012 has also been disqualified as she failed for the same two drugs.

The sample provided by Ilyin at Beijing 2008 was found to have contained stanozolol, while the one he gave at London 2012 also tested positive for anabolic steroid turinabol.

Miankova's team-mate Natallia Mikhnevich has also been sanctioned and she is set to be stripped of the Olympic shot put silver medal she claimed at Beijing 2008 after her samples tested positive for methandienone and stanozolol.

Three Olympic medallists are among the seven named today, five of which are from Belarus, with one failure recorded by athletes from Kazakhstan and Azerbaijan respectively.

Usovich was a member of the 4x400 metres relay team which finished in bronze medal position, meaning the entire team are now set to be stripped of their medals.

Britain will be the beneficiaries of Belarus' disqualification as they will be moved up to third as Russia, who were fourth, have also been disqualified.

Weightlifter Boyanka Kostova of Azerbaijan, fifth in the women's 58kg weightlifting competition at the Games in London four years ago, has also been disqualified by the IOC.

As a result of Miankova's failed test, Cuba's Yipsi Moreno is in line to receive the Olympic gold medal in the hammer throw event at Beijing 2008, with China's Zhang Mengxiu set to be promoted to silver.

Miankova's coach Valery Vorontsov had revealed she was likely to be stripped of her medal after confirming her failure of a re-tested sample prior to Rio 2016.

As well as confirming his athlete was going to lose the gold, Vorontsov also attacked the World Anti-Doping Agency (WADA), claiming it was a "terrorist organisation".

Miankova won the gold medal in the Chinese capital with an Olympic record of 76.34 metres.

Ilyin's two failures were already widely known after they were announced by the International Weightlifting Federation (IWF), before the Kazakhstan Olympic Committee confirmed they had been informed by the IOC that the athlete, one of the country's best known stars, would lose his two Olympic medals.

He participated in the notorious 94kg event in the British capital, which has seen a spate of athlete fail retrospective drugs tests.

Bronze medallist Aatolie Ciricu of Moldova was named by the IOC when they announced sixth athletes had tested positives in the retests on Monday (November 21).

The fourth and seventh place finishers, Russia's Andrey Demanov and Kazakhstan's Almas Uteshov, are also listed today with both failing for turinabol and the latter also failing for steroid stanozolol.

The silver medal should go to South Korea's eighth place finisher Kim Min-jae with ninth placed Pole Tomasz Zielinski set to be upgraded to the bronze.

Zielinski, however, was sent home from Rio 2016 after he failed a test for banned anabolic steroid nandrolone at the National Championships in July.

Nadzeya Ostapchuk could be upgraded to bronze in the shot put after Mikhnevich's confirmed failure, although her career has been tainted by doping.

The 36-year-old claimed the gold medal at London 2012 but was subsequently stripped of the medal for failing a test, with New Zealander Valerie Adams replacing her in top spot.

She was also crowned world champion in 2005 but lost her title as a result of retests conducted by the International Association of Athletics Federations.

Misleydis González of Cuba, who initially came fourth in the event at Beijing 2008, is poised to move up to the bronze medal.

Mikhnevich's husband Andrei, also a shot putter, was banned from sport for life in 2013 for a second doping offence.