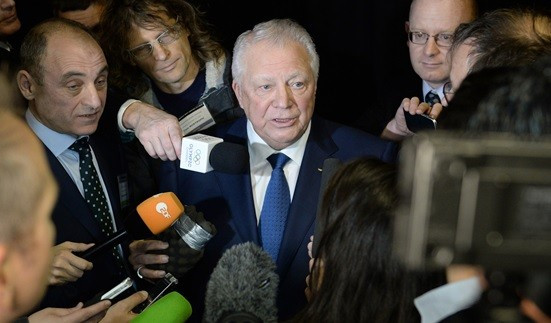 Smirnov, appointed by Russian President Vladimir Putin to lead a Commission set up to look into the allegations, dismissed accusations made in Canadian lawyer Richard McLaren’s report earlier this year during the World Anti-Doping Agency (WADA) Foundation Board meeting.

It was also confirmed here today that the second part of McLaren’s report will be published on December 9 - the day after the conclusion of a three-day IOC Executive Board meeting in Lausanne.

It is expected to be released during a press conference in London.

WADA deputy director general Rob Koehler had earlier outlined several problems and obstacles the anti-doping body are still facing in Russia in a presentation to the Foundation Board.

Koehler revealed that they still had "limited access" to closed cities in Russia, military facilities where many athletes train.

He also announced the Moscow Laboratory, one of the facilities at the centre of the Russian doping scandal, is still "sealed off" and, as a result, they are unable to gain access to the samples which are stored there.

Koehler was highly critical of the stance of denial taken by Russia, particularly former Sports Minister Vitaly Mutko, now deputy Prime Minister, who claimed McLaren’s Report was falsified and that they would prosecute those involved.

Nataliya Zhelanova, one of Mutko's anti-doping advisers and one of his deputies at the Sports Ministry, Yuri Nagornykh, were removed from their positions after the report was published in July.

Smirnov, a former Sports Minister in the Soviet Union, stressed the state-sponsored label was inaccurate as Nagornykh "was not [a member of the Government] - he was Deputy Minister".

"Only Ministers are members of the Government," Smirnov told reporters after he had given his presentation.

Responding to Smirnov's claims, WADA President Sir Craig Reedie said: "The facts are that the McLaren Commission indicated that there had been breaches of the Code involving the Moscow lab and the Ministry of Sport.

"That's the scale of the issue we have to deal with.

Smirnov also vowed that Russia, who have continually denied the allegations of state-sponsored doping since McLaren published his report, would "never accept the collective responsibility sanctions given" - referring to the blanket bans on Russian athletes competing at Rio 2016, handed out by the International Association of Athletics Federations and the International Paralympic Committee respectively.

"The bans were terrible and wrong," he said.

"Clean athletes had lost the opportunity of their careers."

WADA had called for the entire Russian team to be banned from Rio 2015  due to the severity of the McLaren Report.

The RUSADA, declared non-compliant in November last year in the wake of the findings of the first Independent Commission, led by IOC member and former WADA chairman Richard Pound, has also failed to acknowledge the existence of a state-sponsored doping programme, Koehler claimed.

The American did insist, however, that it was "not all doom and gloom" and there was "light at the end of the tunnel".

"We have now revised a detailed roadmap to work with RUSADA to ensure compliance can be achieved, using a series of timelines and deliverables," Koehler added.

It follows insidethegames exclusively revealing earlier this month that an extra $500,000 (£396,000/€460,000) funding will be given to the WADA by the IOC as long as McLaren cooperates.