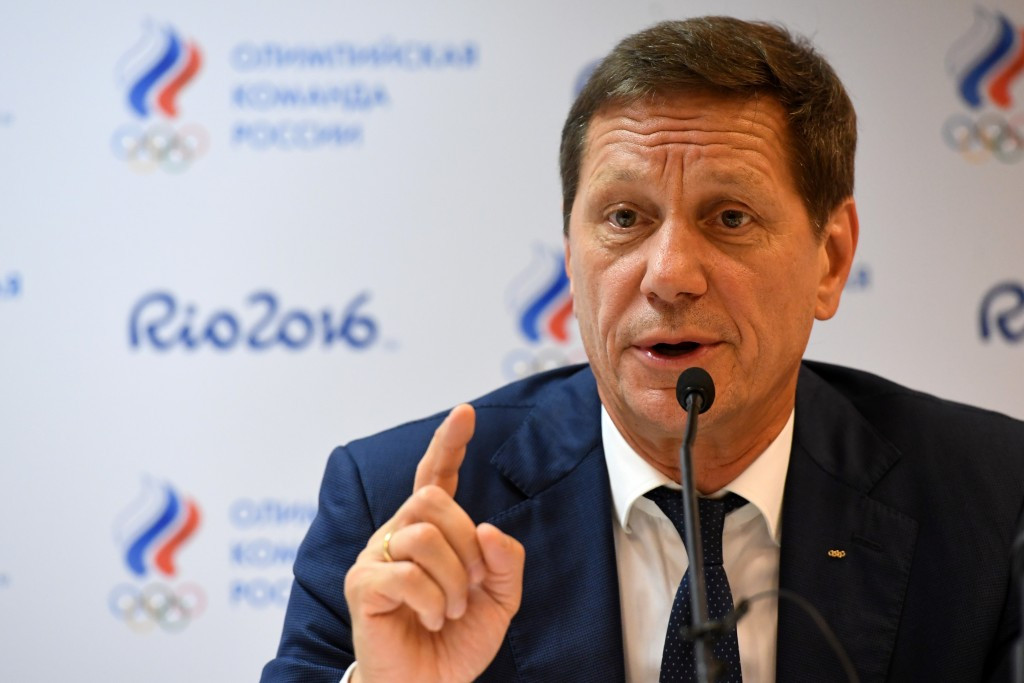 This included a call for the International Olympic Committee (IOC) to spearhead an "expert panel" that award all TUEs.

It was billed as an opportunity for him to give his impressions on the reforms currently taking place ahead of the WADA meetings in Glasgow on November 19 and 20, an IOC spokesperson confirmed, as well as to explain the latest situation in Russia.

WADA President Sir Craig Reedie was a notable absentee however, with insidethegames being told that he was invited but could not attend.

Zhukov, whose speech has been seen by insidethegames. began by claiming their approach is based on a "zero-tolerance" approach.

He then hailed the recent passing of an anti-doping bill criminalising performance enhancing drug use which passed through the lower house of Russian Parliament last week.

Zhukov, also an IOC member and head of the Coordination Commission for Beijing 2022, admitted that they do face "issues" with doping and that the "numerous allegations mentioned in McLaren Report require unbiased investigation".

But he spent the vast majority of his 2,280 word speech criticising WADA, both for the way it has handled its investigation into Russian doping problems this year, as well as for wider governance and structural issues.

Zhukov particularly bemoaned the lack of Russian representation in any WADA Commission, as well as a current testing programme which "cannot function effectively".

He claimed far less samples are currently being collected than when the Russian Anti-Doping Agency (RUSADA) were administering control of testing, and that this does not justify the "huge amounts" they pay.

"So, in a situation like this, why not to find a fast track way to give the accreditation back to RUSADA and to renew its activities, especially since it is under the full control of WADA?

"What is preventing this?

"For our part, we would like to appeal to you as WADA’s founders to assist in the prompt reinstatement of RUSADA and the anti-doping laboratory in their rights.

"Otherwise, and it is obvious, it is simply impossible to fight a large-scale and adequate battle with doping."

Pound was also not present at today's meeting.

The McLaren Report, published in July, made even more damaging revelations about the alleged manipulations of samples at events including the 2014 Winter Olympics and Paralympics in Sochi -  with more expected to follow before the end of the year.

"WADA is asking for more powers but does not hold responsibility for subordinate structures; its activities are not transparent - a lot of decisions are made behind closed doors and it becomes an instrument for manipulation, including those of a political nature, as well as for the establishment of competitive advantages," Zhukov said.

He fiercely criticised the use of TUE's highlighted in a succession of leaks in recent weeks by the Fancy Bears', a group it is believed in Russia.

"The current situation with the issuing of TUE, permitting the use of prohibited substances for medical reasons, needs improving," said Zhukov.

"It is pure nonsense when athletes with serious, at times even chronic, illnesses become Olympic champions and medalists by taking substances which are prohibited for other athletes.

"It happens with increasing frequency and becomes common practice. Soon, healthy athletes at competitions will become an exception.

"Should we really accept this?"

Zhukov, expected to stand-down as ROC President at some stage to concentrate on his position as First Deputy Chairman of the State Duma, called for WADA to "standardise the issuing of permits to use prohibited substances by international federations and NADOs (National Anti-Doping Organisations)".

He callsed for the IOC and Russia to play a role in this process.

"At present, the processes are not standardised and may be subject to manipulation," Zhukov said.

"We should consider the establishment of an Expert Council under the IOC which will accept the confirmed or issued therapeutic use exemptions at the international level.

"In addition, it should be a requirement to publish the Therapeutic Use Exemptions statistics by the sport and country of each respective athlete on an ongoing basis.

"Engaged in this task should be experts in this particular field representing all parties in the process, including Russian specialists."