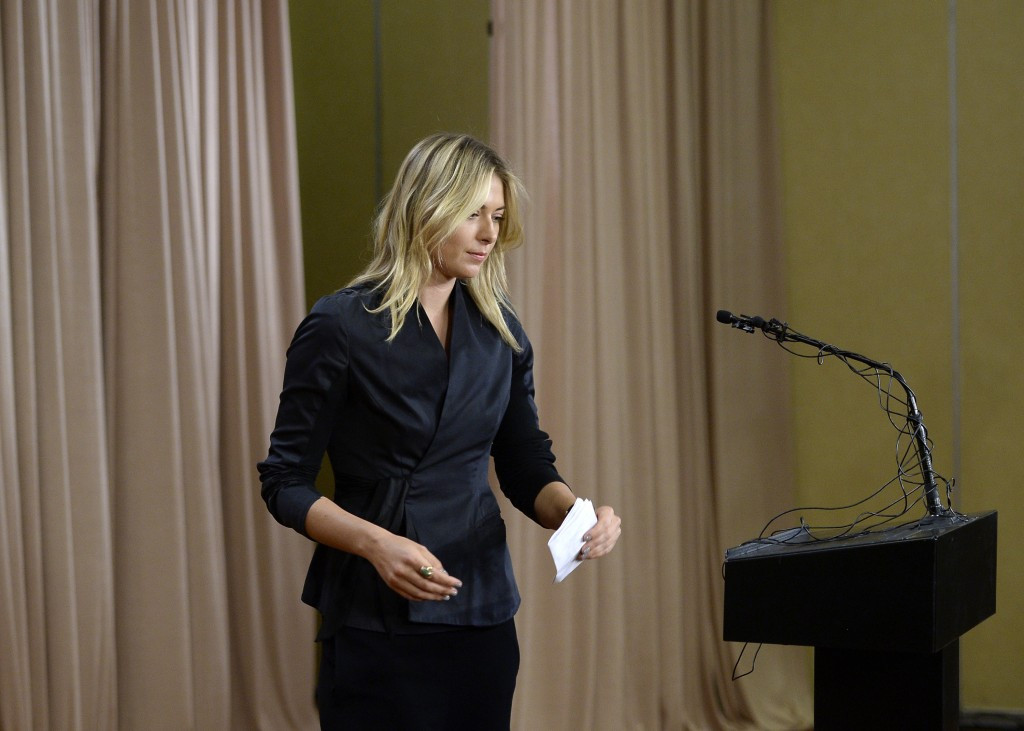 Maria Sharapova's two-year ban for failing a drugs test has been reduced to 15 months and she will be free to return to the sport in April of next year, the Court of Arbitration for Sport (CAS) announced today after the five-time Grand Slam champion's appeal.

Sharapova will now be eligible to take part at the 2017 French Open, a Grand Slam she won in 2012 and 2014, after being cleared to compete from April 26 by the CAS.

The Russian had initially been ruled out of action until January 2018 as a result of the International Tennis Federation (ITF) Tribunal's decision to ban her following a positive test for meldonium.

The 29-year-old admitted to using the substance after it was added to the World Anti-Doping Agency (WADA) Prohibited List from January 1, but claimed she took it for health reasons stretching back to 2006.

The CAS Panel disagreed, however, claiming she "bore some degree of fault" and, therefore, deemed a 15-month suspension, effective from January 26 of this year, "appropriate".

"The Panel found that Ms Sharapova committed an anti-doping rule violation and that while it was with no significant fault, she bore some degree of fault, for which a sanction of 15 months is appropriate," the CAS decision read.

They also stressed in the decision that "under no circumstances can the player be considered to be an intentional doper".

In a statement released following the verdict, Sharapova said she is "counting down the days" until she can return to the court and described today as one of the "happiest days" of her career.

"I’ve gone from one of the toughest days of my career last March when I learned about my suspension to now, one of my happiest days, as I found out I can return to tennis in April," she said.

"In so many ways, I feel like something I love was taken away from me and it will feel really good to have it back.

"Tennis is my passion and I have missed it.

"I am counting the days until I can return to the court.

"To my fans, I thank you so much for living and breathing so many of these tough months together.

"During this time, I have learned the true meaning of a fan and I am so fortunate to have had your support."

Sharapova, who had initially hoped to have the ban lifted in time to be able to compete at the Olympic Games in Rio de Janeiro in August, then reached an agreement with CAS in July to defer a ruling until September.

She called on the ITF and other anti-doping authorities in tennis to "study what these other Federations did, so that no other tennis player will have to go through what I went through".

A number of athletes to have tested positive for meldonium, a heart-attack drug developed in Latvia, have had their suspensions lifted by their International Federations due to the confusion surrounding the substance.

"I have taken responsibility from the very beginning for not knowing that the over-the-counter supplement I had been taking for the last ten years was no longer allowed," she added.

"But I also learned how much better other Federations were at notifying their athletes of the rule change, especially in Eastern Europe where mildronate is commonly taken by millions of people.

"Now that this process is over, I hope the ITF and other relevant tennis anti-doping authorities will study what these other Federations did, so that no other tennis player will have to go through what I went through."

Racket manufacturer Head, one of Sharapova's sponsors, congratulated the Russian for the partial victory at the CAS, with chief executive Johan Eliasch claiming "justice has been served".

"We are proud to have stood by Maria for the right reasons throughout these difficult times," the statement added.

WADA claimed there was evidence that meldonium was being used for performance enhancing purposes when they added the drug to the banned list.

They admitted in April, however, that more research was required to calculate how long the product remains in the human body.

Since Sharapova's ban was issued, WADA have announced even more lenient concessions, with athletes who returned a positive test for the substance between January 1 and February 29 now also eligible for a "no fault" verdict if their sample contained less than five micrograms.

The ITF Tribunal, however, dismissed Sharapova's claim that she was prescribed the drug by her doctor for health issues dating back to 2006, including magnesium deficiency, an irregular heartbeat and a family history of diabetes.

"The World Anti-Doping Agency (WADA) acknowledges the decision taken today by the Court of Arbitration for Sport (CAS) regarding the tennis player, Maria Sharapova," a WADA statement read.

"WADA respects all decisions taken by CAS, the highest independent sport tribunal which has the jurisdiction to determine sports-related appeals.

"WADA recognises that CAS fully scrutinised all available information and evidence in Ms. Sharapova’s appeal and imposed what it deemed to be an appropriate sanction under the World Anti-Doping Code.

"WADA abides by the CAS ruling and will make no further comment."