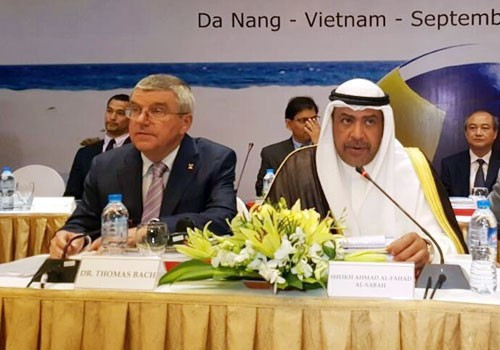 Bach, speaking here today at the General Assembly of the Olympic Council of Asia (OCA), claimed there is a need for specific procedures regarding testing, compliance and sanctioning issues in order to add transparency to the anti-doping process.

More harmonised conditions must be found between testing procedures in different countries, he added.

Bach also reiterated his view that testing and sanctioning should be made independent from sports organisations ahead of an Olympic Summit in Lausanne on October 8 where this is expected to be discussed in more detail.

He did, however, claim that a revamped World Anti-Doping Agency (WADA) must remain at the forefront of discussions.

The German had not initially mentioned doping challenges in his opening remarks here before being asked for an update on integrity issues by National Olympic Committee of Sri Lanka secretary genera Maxwell de Silva.

"You’re all aware of the challenges we had with regard to the protection of clean athletes before the Summer Games in Rio de Janeiro," Bach replied.

"The IOC, on very short notice, had to take some preliminary decisions and actions in order to protect clean athletes.

"In these discussions, It has become more obvious that we have to look at the WADA system.

"We have to make new efforts to strengthen the fight against doping.

"In the IOC Session [in Rio de Janeiro last month], we decided that the IOC will ask for a full review of the WADA anti-doping system in order to make it more robust, more efficient, more transparent and more harmonious.

"In this respect, we also said that this has to happen together with WADA.

"WADA is the platform where we can work together with the Governments, with whom we need close cooperation."

"We think the whole anti-doping system should be independent from sports organisations with regard to testing and sanctioning," he added.

"This is why we left sanctioning to the CAS (Court of Arbitration for Sport) in Rio, and this can serve as an example for all other sports organisations.

"The system has to be more transparent - it has to be clear who is having which responsibilities.

"Before the Rio Games, the IOC had to take decisions on issues with were not in our remit.

"There were other organisations more in the frontline than the IOC.

"We have to be very clear who is responsible for what: testing, compliance, sanctioning.

"We owe this to the athletes, so they know what is happening, and we owe it to the public to be fully transparent."

Allegations of state-sponsored doping in Russia continue to cause controversy ahead of the expected publication of more revelations from the WADA-commissioned report compiled by Canadian lawyer Richard McLaren later this year.

Divisions have since grown between the two organisations.

Figures close to WADA have even wrned that the IOC may even seek to withdraw from the body in favour of an alternative "integrity unit" to administer over doping and match fixing issues.

The IOC have since told insidethegames that there is not a "shred of truth" in this and the idea was not mentioned today.

But the claims that specific critieria for non-compliance must be introduced are significant because the IOC believes WADA had no right to call for a blanket ban of Russia.

WADA, on the other hand, believe they should have specific powers to sanction National Olympic Committees and International Federations when they are deemed non-compliant.