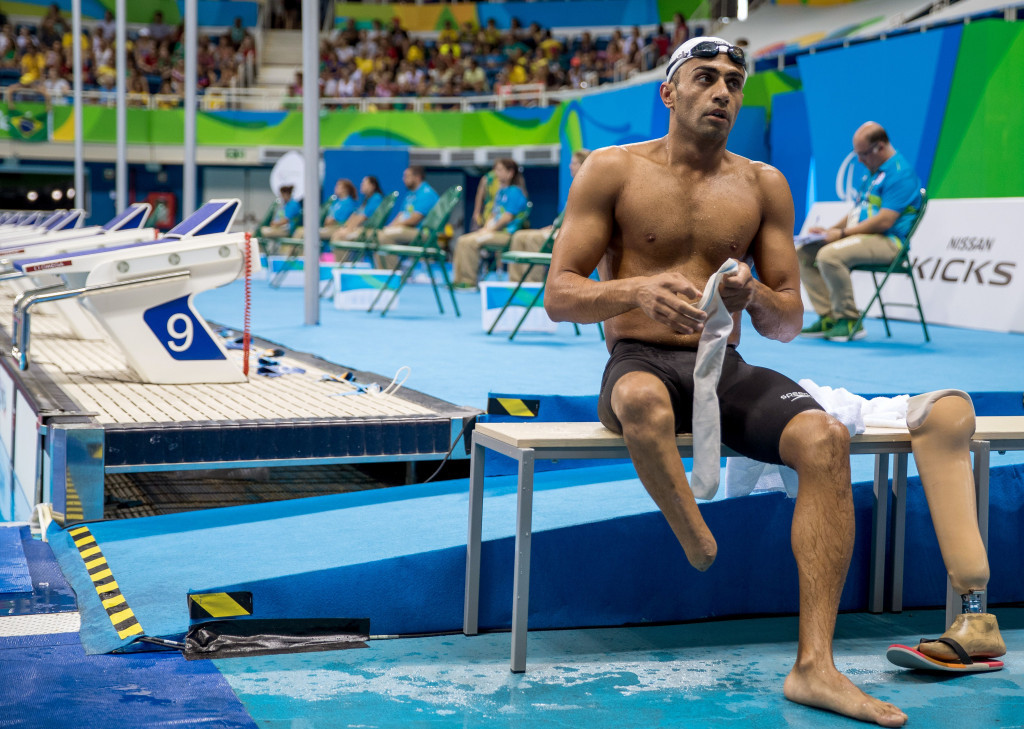 Independent Paralympic Athletes (IPA) member Ibrahim Al-Hussein has spoken here today of his hopes that an equivalent team will not be needed by the time of the Tokyo 2020 Paralympic Games and that all refugees like himself will be able to compete under their own country’s flag.

The Syrian rose to prominence during the Rio 2016 Olympic Torch Relay when he carried the Torch in Athens, alongside Hellenic Olympic Committee (HOC) President Spyros Capralos.

Al-Hussein, who had been a judoka and swimmer before losing part of his right leg to a bomb in 2012, has been receiving the support of the Hellenic Paralympic Committee to live and train in Greece.

He has competed here at the Paralympic Games in the men’s 50 metres freestyle S9 and men’s 100m freestyle S9 events, setting personal bests of 35.54sec and 1:20.98 respectively.

It comes on the back of him serving as the IPA team's flagbearer during last week's Opening Ceremony at the Maracanã Stadium.

According to the Syrian Observatory for Human Rights, more than 300,000 have lost their lives in five-and-a-half years of armed conflict in Al-Hussein's homeland, which began with anti-Government protests before escalating into a full-scale civil war.

More than 11 million others have been forced from their homes as forces loyal to President Bashar al-Assad, and those opposed to his rule, battle each other - as well as jihadist militants from so-called Islamic State.

"I hope that in four years' time, by the time we come to Tokyo 2020, we will have ended bloodshed, we've ended the war, we will have no more refugees and we'll do away with this IPA team," he said.

"We don't want any refugees in the future."

It has been reported today that United States Secretary of State John Kerry and Russian Foreign Minister Sergey Lavrov have agreed to extend the ongoing ceasefire in Syria for another 48 hours.

The move comes as the ceasefire seems to be holding into its second day, with one monitoring group reporting no deaths in the area covered by the US-Russia agreement.

"As for the ceasefire agreement in Syria, everybody knows what is the problem in Syria, so I call on all countries of the world to stop the bloodshed so the Syrian people can go back to live in peace," said Al-Hussein.

Al-Hussein has been named among the six nominees shortlisted for the Whang Youn Dai Achievement Award, which is given to the athletes who best exemplify the spirit of the Paralympic Games and the Paralympic values.

He is in contention for the men's award along with Peruvian sprinter Jose Luis Casas and Iraqi wheelchair fencer Ammar Hadi Ali.

"The Olympic and Paralympic Games is the biggest achievement for any athlete," said the Iranian, who lives in the US.

"For me absolutely it's the same.

"It was my greatest privilege being part of these Rio Paralympic Games.

"It's the first step because when I go back to the US it'll be a new season for me."

Both athletes were supported by their Chef de Mission, Tony Sainsbury, who held the equivalent role on five occasions for the British Paralympics team.

"What we've demonstrated here to everybody in their performances are compatible with the values of the IPC - courage, determination, inspiration and equality," he said.

"I never ever expected more of my athletes.

"They deserve to be here, they're compatible and up there with their peers.

"What we have in these two, and they're two of a number that we could have brought to the Games, is the power of Paralympic sport to bring about social change, to make people look at other people in a totally different way."