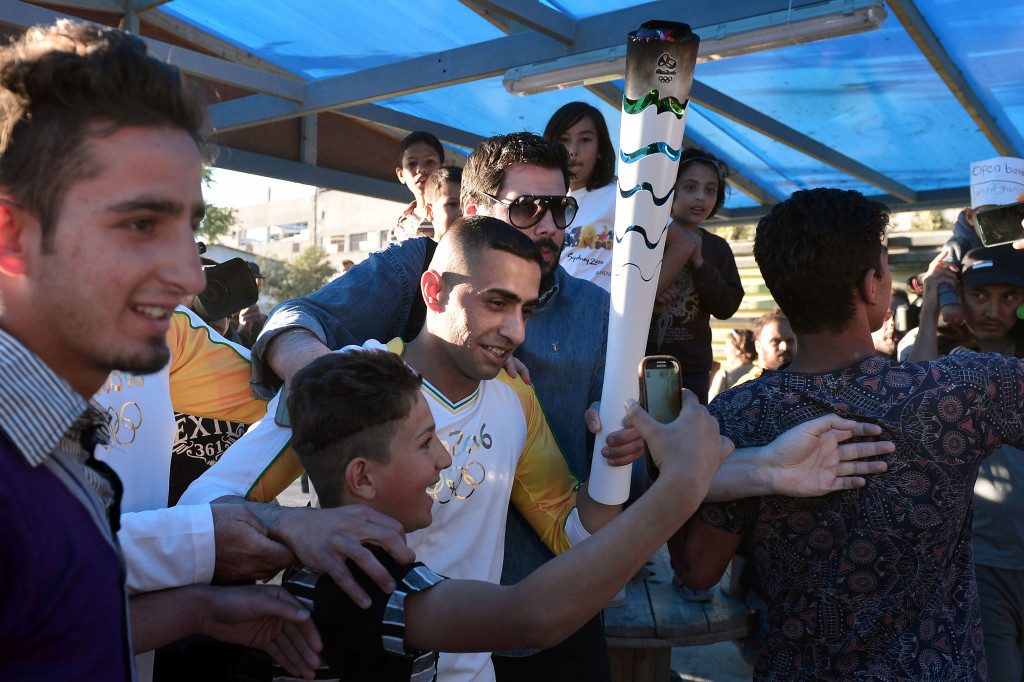 Ibrahim Al Hussein and Shahrad Nasajpour have been announced as the two refugee and asylee Para-athletes who will make up the Independent Paralympic Athletes (IPA) team at the Rio 2016 Paralympic Games next month.

The team will compete under the Paralympic flag, and will march first at the Opening Ceremony on September 7.

For official presentations, such as medal and village welcome ceremonies, the Paralympic anthem will be played.

Para-athletes have competed as independents at the Paralympic Games before, but this is the first time those with refugee and asylee status have been given special attention.

Al Hussein rose to prominence during the Rio 2016 Olympic Torch Relay when he carried the Torch in Athens, alongside Hellenic Olympic Committee (HOC) President Spyros Capralos.

The Syrian swimmer, who had been a judoka and swimmer before losing part of his right leg to a bomb in 2012, has been receiving the support of the Hellenic Paralympic Committee to live and train in Greece.

He will compete in the men’s S10 50 metres and 100m freestyle events at the Paralympic Games.

“I have been dreaming of this for 22 years,” said Al Hussein.

“I thought my dream had gone when I lost my leg but now it is back for real.

“I can’t believe I am going to Rio.

“I want to send a message to all those injured that they too can achieve their dreams.”

Nasajpour is the second member of the refugee team with the Iranian, who is living in the United States, set to compete in the men’s F37 discus competition.

National Paralympic Committees approached the IPC when they became aware of Para-athletes who were refugees or asylees training in their countries.

In order to compete in the IPA team at Rio 2016, those nominated must have official refugee status verified by the United Nations and must also possess the relevant travel documentation.

Upon arrival in Rio de Janeiro, they will stay in the Athletes' Village alongside more than 4,300 athletes from around 160 countries.

They will be supported by their Chef de Mission, Tony Sainsbury, who held the role on five occasions for the British Paralympics team.

Ramon Boixadera, the former manager at London 2012’s Paralympic Village, will act as their team official and Eleni Kokkinou will serve as a swimming coach.

Following the Games, the development arm of the IPC, the Agitos Foundation, will provide long-term support.

Worldwide Paralympic Partner, Visa, are set to provide further support to the team and International Partner, Allianz, has contributed through insurance and support to the IPA delegation while in Rio.

Additionally, prosthetics and other rehabilitation products will be provided by Ottobock, while they will receive a team uniform and kit from Adidas and Speedo, organised through the World Federation of Sporting Goods Industry.

Panasonic are providing electrical goods to the team, with all other needs, including travel to Rio de Janeiro, being provided by the International Paralympic Committee.

“Pulling everything together has been a real team effort and I am grateful to everyone who has helped, and all of the partners who have come through to support the team,” said Sainsbury.

“These athletes will help to raise awareness of the plight of thousands of refugees and asylum seekers who make difficult decisions and journeys, often with impairments.

“They will help to drive social inclusion and spread the Paralympic values of courage, determination, inspiration and equality around the world.”