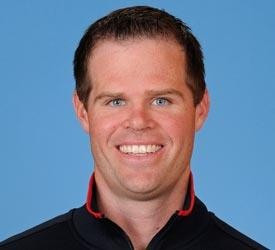 USA Swimming have announced the appointment of Keenan Robinson as their national team high performance director.

The newly-created position has been aimed at helping the national team to achieve international success, with Robinson being tasked with providing information, programmes and services to aid coaches and athletes to make decisions which can optimise performance.

He will also oversee their sports medicine and science network, provide individual national team coach and athlete support, as well as manage competition and performance support at domestic and international competitions.

"It is a tremendous honour to serve the USA Swimming membership," Robinson said.

"The high performance staff and sports medicine and science network are the absolute best in the world and it’s humbling to join this esteemed team."

Robinson has been the head athletic trainer for the United States swimming team at the last two Olympic Games at London 2012 and Rio 2016.

His role saw him have the responsibility for the well-being of the entire team of swimmers, which would help to allow them to compete in top physical condition.

He has been a long-term member of the North Baltimore Aquatic Club staff as director of athlete services, which has seen Robinson work with Olympic gold medallists Michael Phelps and Allison Schmitt, as well as being key advisor to head coach Bob Bowman.

Bowman has backed Robinson’s appointment to the role, claiming he will help to continue the country’s success in the pool.

"The move to USA Swimming is a natural progression for Keenan," Bowman, head men’s coach for United States team at Rio 2016, said.

"He has been a key contributor to our staff since 2004, and we would not have achieved the successes we have without him."

Their team’s success was overshadowed in the closing days of the Games, however, after Ryan Lochte was among four US swimmers who initially claimed they had been robbed at gunpoint when returning to the Olympic Village, before closed circuit television footage emerged of the men vandalising a petrol station following a night out.