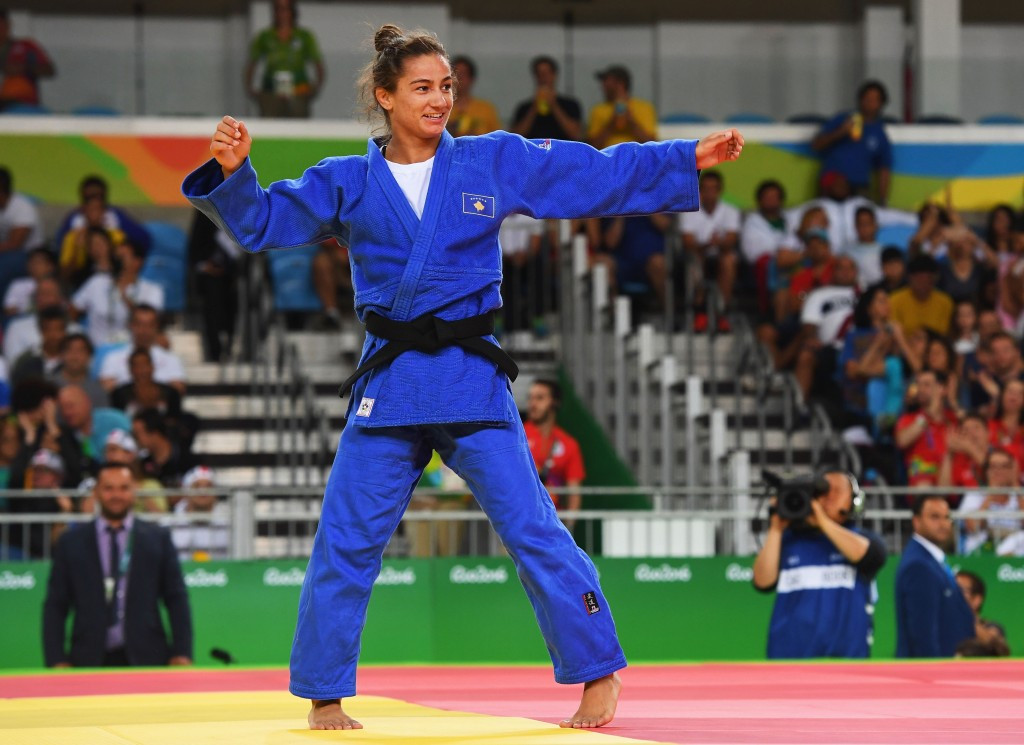 The 25-year-old defeated Italy's Odette Giuffrida in the final of the women's under 52 kilograms event to add Olympic gold to the two world titles and three European crowns she has won since 2013.

Kosovo were only recognised by the International Olympic Committee (IOC) in December 2014, a decision taken in the face of huge opposition from countries who refuse to acknowledge the country's existence, particularly Serbia and Russia.

Kelmendi had lived with the pressure since then of knowing that she would enter Rio 2016 with the burden of being Kosovo's only realistic chance of a medal.

The tears that flowed after her victory over Giuffrida were of joy, of course, but also probably as much of relief.

Kelmendi, knocked out in the first round at London 2012 when she competed for Albania, scored an early point, but conceded a penalty for being too defensive.

As the match drew to a close she skirted the line with delay tactics, but ultimately prevailed to earn the gold.

If her tactics against Giuffrida and in the semi-final, Japan's three-time world champion Misato Nakamura, earned occasional jeers from the crowd, then they could probably be forgiven, especially with the magnitude of what victory would mean to Kelmendi and Kosovo.

"To be honest, I came here for the gold medal, but it's crazy.

"I'm so happy for me, for my coach, for all my country.

"It means a lot. People, especially kids in Kosovo, look to me as a hero.

"I just proved to them that even after the war, even after we survived a war, if they want something they can have it. If they want to be Olympic champions, they can be - even if we come from a small country, a poor country."

IOC President Thomas Bach kept a promise he had made to Besim Hasani, the President of the Kosovan Olympic Committee, and who had campaigned tirelessly for his country to be allowed to compete in the Games, and presented Kelmendi with her medal.

It was Bach's bravery in defying opposition and pushing forward Kosovo's request for membership that helped set up this moment, which also made Kosovo the 100th country in the 120-year history of the Olympic Games to win a gold medal.

I am happy for the victory of Majlinda. She deserves it after so many years of effort and dedication #Judo #JudoRio2016 #MoreThanASport

But Marius Vizer, the man who shared the medal presentation with Bach, even though the two fell out spectacularly last year, can claim to be the architect.

It was the International Judo Federation, of which Vizer is President, that was the first world governing body to recognise Kosovo and provided the impetus for everything else that followed.

Nakamura won one of the two bronze medals, beating Brazil's Erika Miranda with a golden score.

The men's under 66kg event also proved to be an historic occasion as Fabio Basile won Italy's 200th gold medal in the Summer Olympics.

The 21-year-old shocked South Korea's world number one An Baul with an ippon halfway through the bout and celebrated with a memorable backflip.

"Because in real life, I'm going to realise in a few hours that my life has always been judo."

Japan's Masashi Ebinuna secured the bronze medal, as he did at London 2012.

Uzbekistan's Rishod Sobirov won the other bronze medal, the third consecutive Olympics he has done so following Beijing 2008 and London 2012.

Tomorrow's competition is due to feature the London 2012 gold and silver medallists, Georgia's Lasha Shavdatuashvili and Hungary's Miklos Ungvari, in the men's under 73kg, both having moved up from the under 66kg category.

The top seed is South Korea's An Changrim.

In the women's under 57kg, defending Olympic champion Kaori Matsumoto will face competition from the current world number one, Mongolia's Sumiya Dorisuren.

London 2012 silver and bronze medallists Corina Caprioriu from Romania and America's Marti Malloy will also be back on the mat.