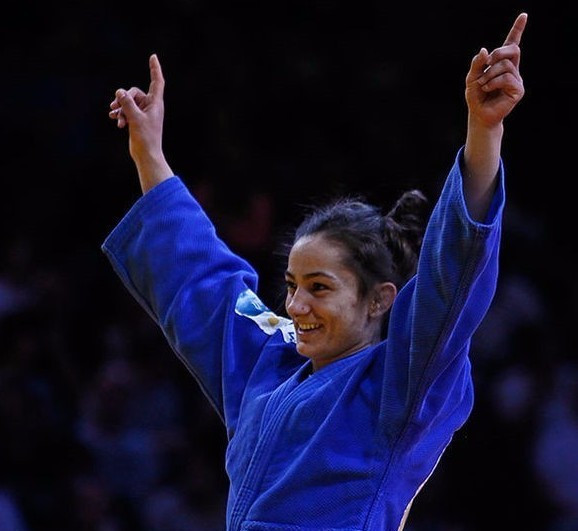 Less than six months before her country is due to make its debut in the Olympic Games in Rio de Janeiro, Kosovo's Majlinda Kelmendi must be daring herself to dream that she can mark the historic occasion with a gold medal.

The 24-year-old was already signalled out as one to watch in the under 52 kilogram having won World Championship titles in 2013 and 2014 but, following this dominant performance here at the Paris Grand Slam, she is now established firmly as the favourite.

It took her less than a minute to beat Romania's European Games champion Andreea Chitu in the final before an audience that included Association of National Olympic Committees President Sheikh Ahmad Al-Fahad Al-Sabah.

Kelmendi counterattacked the first attempt by Chitu for a yuko score and had her rival on the floor, pinning her down and securing victory with an armlock and ippon.

It was Kelmendi's 12th gold medal in an International Judo Federation (IJF) World Tour event and her fourth in a Grand Slam.

She is now unbeaten in this event in the French capital, one of the highlights of the IJF season, since 2013, when she was beaten in the final by Japan's Yuki Hashimoto.

If Kelmendi feels the expectations of her country, then so too does Brazil's Sarah Menezes.

The 25-year-old from Teresina is one of her country's main hopes for a gold medal at Rio 2016, where she will be defending the title she won in the under 48kg category in London four years ago.

Menezes won the opening IJF Grand Prix of the season in Havana last month but had to settle for a bronze medal here after coming through the repechage having lost earlier in the competition against Belgium's Charline Van Snick.

She needed to overcome a strangulation, recovering to claim the bronze medal, her first in this tournament since a silver in 2012.

The winner was Kazakhstan's Otgontsetseg Galbadrakh, whose victory was the best of her career.

It came against Urantsetseg Munkhbat, a Mongolian who was a former team-mate of Galbadrakh before she decided to switch nationalities last August.

The decision meant that ranking points of the the 24-year-old Galbadrakh were reset to zero.

She has since climbed back to 23rd in the world following victory at the IJF Grand Prix in Jeju Island in South Korea last November and is set to raise further after this victory against the top-ranked Munkhbat.

She took the lead with a yuko from a well-executed yoko-tomoe-nage and successfully defended her advantage.

The other bronze medal was won by Hungary's Eva Csernoviczki, who beat Van Snick.

The last final of the opening day of this event saw a rousing victory for France's Clarisse Agbegnenou, the 2014 world champion, in the under 63kg division.

The 23-year-old from Rennes brought the crowd of 5,000 to their feet when she beat Japan's Miku Tashiro, the third time in four years she has won this event.

Agbegnenou clinched the fifth Grand Slam gold medal of her career - she also won in Abu Dhabi in 2011 and 2015 - with a yuko from an ouchi-gari before following with a strong classical immobilisation from a kesa-gatame.

The women's under 57kg division saw another Mongolian defeat, this time for Dorjsürengiin Sumiya.

The world number one had to settle for the silver medal here for the second consecutive year after being defeated by South Korea's Kim Jan-Di, who is a judoka in form.

The 24-year-old claimed her fourth consecutive victory on the IJF World Tour - and second in a Grand Slam having won in Abu Dhabi last October - with an ippon.

Dorjsürengiin had qualified for the final by defeating Brazil's first female world champion Rafaela Silva with only eight seconds left.

Silva recovered from that disappointment to beat Poland's Arleta Podolak for the bronze medal.

The men's competition was dominated by Japan, winners of two of the three gold medals.

The first went to Toru Shishime, who was in control from the start in the under 60kg final against Azerbaijan's Ilgar Mushkiyev, scoring a yuko after only 11 seconds.

The 23-year-old, winner of the world junior under 55kg here seven years ago, scored a second yuko towards the end to seal a comfortable win.

In a division notable for a record 55 entries, the bronze medals were won by South Korea's Kim Won Jin and France's Walide Khyar.

Kim, who had been seeded first, beat Armenia's Hovhannes Davtyan.

The 20-year-old Khyar, meanwhile, was ranked only 60th in the world but defied that disadvantage to beat Uzbekistan's Sharafuddin Lutfillaev.

Japan's second victory came in the under 66kg division thanks to Masashi Ebinuma.

Ebinuma may be a three-time world champion and London 2012 bronze medallist but was considered the underdog against Mongolia's Tumurkhuleg Davaadorj, winner of this title last year.

After less than a minute, Ebinuma launched his left handed uchi-mata on the edge of the fighting area.

Davaadorj tried to counterattack with a ura-nage, but the Japanese was on his guard and pulled his arm to clinch the win with an ippon.

An Ba-Ul, the South Korean winner of last year's World Championships, took the second bronze medal, beating Slovenia's Andraz Jereb with an ippon only 18 seconds from the end.

An's team-mate AN Chang-Rim did ensure South Korea had a gold medal to celebrate, beating Russia's Denis Iartcev in the under 73kg division with a waza-ari.

It was a second consecutive Grand Slam win for the 21- year-old following Abu Dhabi last year.

In the semi-final, AN had beaten last year's Paris Grand Slam winner Hiroyuki Akimoto, who bounced back to defeat Georgia's Nugzar Tatalashvili in the bronze medal play-off.