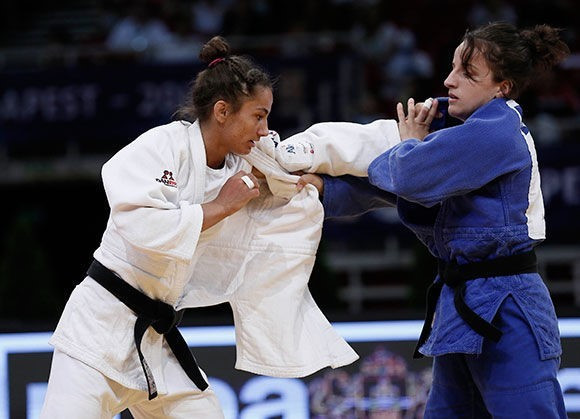 Two-time world champion Majlinda Kelmendi of Kosovo reasserted her status as favourite for gold at this year's Olympic Games in Rio de Jameiro with victory in the women's under 52 kilograms event on the opening day of the International Judo Federation (IJF) Budapest Grand Prix at the Papp László Sportaréna.

Kelmendi came up against compatriot and training partner Distria Krasniqi in what proved to be a tense final before she clinched victory in the all-Kosovan affair on shido penalties as her team-mate had amassed three compared to her one.

Larisa Florian of Romania and Poland's Karolina Pienkowska were the recipients of the two bronze medals on offer as they defeated Christianne Legentil of Mauritius and Astride Gneto of France respectively.

Japan were the dominant nation on the first day of competition in the Hungarian capital, a candidate city for the 2024 Olympic and Paralympic Games along with Los Angeles, Paris and Rome, as they secured four titles.

Hiromi Endo got the Japanese off to the best possible start as she claimed an ippon victory over Frenchwoman Romane Yvin in the women's under 48kg weight division.

The Japanese success continued when Momo Tamaoki got the better of team-mate Nae Udaka in the under 57kg gold medal bout.

There was a surprise result in the women's under 63kg tournament as Nami Nabekura upset the odds by overcoming Tina Trstenjak of Slovenia in the final to hand Japan their third crown of the day.

Dai Aoki then belied his world ranking of 278 to bag Japan's fourth gold as he stunned Tashkent Grand Prix bronze medallist Otar Bestaev of Kyrgyzstan to top the podium in the men's under 60kg weight division.

The result for the unknown Japanese judoka gave him his maiden IJF gold medal.

Cedrid Ravol of France and Sharafuddin Lutfillaev of Uzbekistan did enough for bronze, beating Irakli Kupatadze of Georgia and Azerbaijan's Ilgar Mushkiyev respectively.

Adrian Gomboc was another athlete to secure their maiden IJF title as the Slovenian brought a halt to the Japanese dominance with victory over Masaya Asari thanks to scoring two yukos in their under 66kg contest.

Taroh Fujisaka added to Japan's haul with a bronze medal, prevailing on shido penalties in his clash with Alexandre Mariac of France, while Uzbekistan's Rishod Shobirov, a two-time Olympic bronze medal winner, took home the other by beating Baruch Shmailov of Israel.

Rok Draksic then followed in compatriot Gomboc's footsteps, bagging Slovenia's second title by winning his under 73kg gold medal fight with Dmytro Kanivets of the Ukraine.

The IJF Budapest Grand Prix is due to conclude tomorrow.

To watch all the latest action and interviews on Judo TV click here.