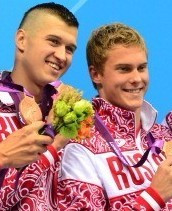 Nikita Lobintsev and Vladimir Morozov are expected to be cleared by the International Swimming Federation (FINA) to compete at the Olympic Games as the ban on Russians barred from taking part at Rio 2016 because of their links to the McLaren Report begins to crack.

Artyom Patsev, a Russian sports attorney who had represented the pair at a Court of Arbitration for Sport (CAS) hearing, told the country's official news agency TASS that they had been cleared.

"Yes, Morozov and Lobintsev were granted permission from FINA to take part in the Olympics," he said.

FINA, in a carefully worded statement, claimed a final decision needed to be rubber-stamped by the IOC.

"The eligibility of Russian swimmers Vladimir Morozov and Nikita Lobintsev to compete at the Olympic Games Rio 2016 has not been confirmed, and will not be confirmed until the IOC’s three-person commission to review Russian entrants renders its final decision on these athletes, along with the other members of the Russian swimming team," it said.

If Lobintsev and Morozov are cleared, the decision could potentially put pressure on other International Federations who have banned Russian competitors from taking part at Rio 2016 because they were mentioned in the McLaren Report.

It will also give hope to another Russian,  Yuliya Efimova, the 100 metres breaststroke world champion and a contender for a medal at Rio 2016, that she will be cleared to compete.

Russia had agreed last month not to select athletes for Rio 2016 who had either previously served doping bans or were mentioned in the McLaren Report, which had found evidence of state-sponsored doping there.

"I can confirm that Lobintsev and Morozov are being allowed to compete in the Games," Lobintsev's agent Andrei Mitkov told the Interfax news agency.

"We will meet with IOC representatives to discuss the outcome for this situation."

The IOC last week established a three-person panel made up of representatives from its ruling Executive Board to decide o the eligibility of Russian athletes.

It will make rulings based on independent advice from arbitrators from the CAS.

The FINA Bureau initially did not include Morozov and Lobintsev on the list of eligible competitors, in respect of the IOC’s ruling that nobody implicated in the WADA [McLaren] Report may be accredited for entry in the Olympic Games," FINA said.

"Both athletes were named in the WADA [McLaren] Report.

"The two athletes filled an appeal to CAS and FINA understands that this Court has forwarded the case to the IOC three-person Commission for final decision."

"In some other sports clean athletes are suspended from the competitions without any justification or evidence just because they are mentioned in McLaren report. Isn’t this discrimination?" he told the IOC Session currently taking place here.

Lobintsev and Morozov had been the first Russians to appeal to CAS, who have set up an ad hoc Division here, over the decision to stop them competing at Rio 2016.

Lobinstev and Morozov were part of the Russian 4x100m freestyle team that won a bronze medal at London 2012.

Lobintsev also won the silver medal in the 4x200m freestyle relay at Beijing 2008.

Unlike Efimova, Morozov and Lobintsev have never been suspended for failing a drugs test but were named in association with the "disappearing positive methodology system" in which samples were illegally switched for clean ones.

But it was revealed by the United States Anti-Doping Agency last week that Lobintsev had tested positive for the banned heart attack drug meldonium last month.

They did not impose a ban because he claimed he had been taking it for seven years after it was prescribed by a Russian doctor.

FINA also revealed that they had re-tested all the samples taken from Russian swimmers at last year's World Aquatics Championships in Kazan and all had had returned negative.