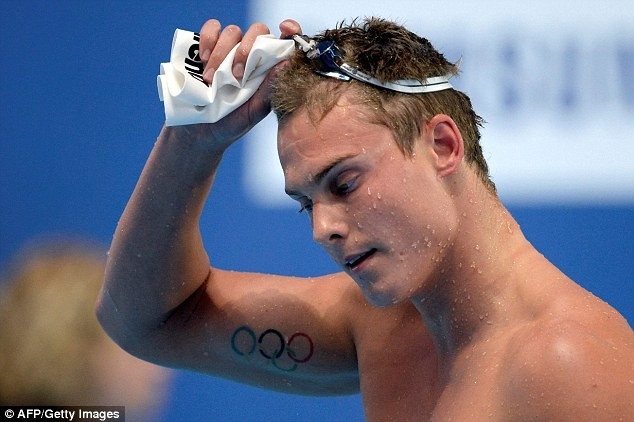 Russian swimmers Nikita Lobintsev and Vladimir Morozov today became the first athletes to register cases with the Court of Arbitration for Sport since it established an ad hoc Division for the Olympic Games here, it was announced.

They have each filed appeals against the decision by the International Olympic Committee (IOC) and International Swimming Federation (FINA) to bar them from competing at Rio 2016 after they were linked to doping in the McLaren Report.

They were among seven Russian swimmers excluded from Rio 2016 by FINA following the controversial decision by the IOC not to impose a blanket ban on the country, despite widespread evidence of state-sponsored doping in a number of sports, including swimming.

But Yuliya Efimova, the 100 metres breaststroke world champion and a contender for a medal at Rio 2016, has not appealed against the decision not to allow her to compete.

Following the decision on Monday (July 25), both Efimova's agent Andrew Mitkov and Russian Sports Minister Vitaly Mutko had announced she planned to take her case to CAS.

Lobinstev and Morozov were part of the Russian 4x100 metres freestyle team that won a bronze medal at London 2012.

Lobintsev also won the silver medal in the 4x200m freestyle relay at Beijing 2008.

Unlike Efimova, Morozov and Lobintsev have never been suspended for failing a drugs test but were named in association with the "Disappearing Positive Methodology System" in which samples were illegally switched for clean ones.

It has been revealed by the United States Anti-Doping Agency (USADA), however, that Lobintsev had tested positive for the banned heart attack drug meldonium last month.

They did not impose a ban because he claimed he had been taking it for seven years after it was prescribed by a Russian doctor.

“Based on the latest guidance offered by WADA on June 30, 2016, for cases involving meldonium, Lobintsev will not face a period of ineligibility or loss of results,” a USADA statement said.

As part of the condition of Russia being allowed to compete at Rio 2016, it was agreed that athletes who had previously tested positive for banned drugs and were linked to the McLaren Report would not be selected.

Lobinstev and Morozov are challenging this ruling.

"Both swimmers request CAS to declare the decision of the IOC Executive Board of 24 July 2016 (paragraph 2) invalid and unenforceable," CAS said in a statement.

"Such paragraph sets out the new criteria for the admission of Russian athletes at the Olympic Games in Rio.

"The swimmers also request that the decision of the FINA Bureau of 25 July 2016, declaring both of them ineligible for the Olympic Games in Rio, be set aside.

"Furthermore, they request that the IOC validates the entries submitted by the Russian Olympic Committee for them to compete in the Olympic Games in Rio."

A ruling is expected early next week.

Lobinstev may have escaped a ban after testing for meldonium but USADA chief executive Travis Tygart criticised the 27-year-old from Yekaterinburg for having used the drug for such a long period of time.

Tygart claimed that he was taking it not because he had a medical condition but to boost his performance.

During the period he was taking meldonium, Lobinstev also won four medals at the FINA World Championships, three silver and a bronze, and two European Championship gold medals.

"The disturbing pattern of use associated with this performance-enhancing drug appears to be one more example of growing practice in sport in which coaches ask for, physicians prescribe, and athletes use pharmaceuticals not for their primary purpose of health and wellness but to enhance athletic performance," said Tygart.

Lobinstev and Morozov both competed for the Trojan Swim Club in Los Angeles but have now been suspended by the coach Dave Salo following being named in the McLaren Report.

Efimova also trained with the Trojan Swim Club and had tested positive for meldonium earlier this year but had her suspension lifted because the World Anti-Doping Agency are currently evaluating the status of the drug.

She was banned for two-years in 2014 after it was revealed she had tested for DHEA in 2013.

Efimova has also been suspended by the Trojan Swim Club, whose coach Dave Salo told the Los Angeles Times that all its international swimmers were barred until "I can somehow find a way to assure we don’t have these kinds of problems."