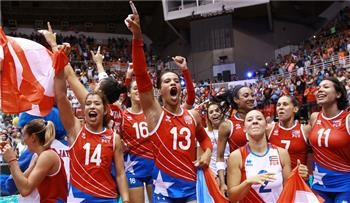 Puerto Rico's women booked a place at the Olympics for the first time at their home International Volleyball Federation (FIVB) Rio 2016 qualification tournament in San Juan.

After winning their first two matches in the four team round robin event, the hosts knew that victory in their final clash would confirm them as overall winners and seal the only place available in the Brazilian city this August.

They duly delivered as they came past Kenya in straight sets, 25-8, 25-23, 25-15, to spark jubilant scenes at the Roberto Clemente Coliseum.

“The 22nd of May will go to the history of the sport in Puerto Rico and the credit goes to all the coaches and support personnel who worked in favour of this achievement, this feat,” said coach Juan Carlos Núñez.

Daly Santana sealed the victory with a bomb from the back court.

Puerto Rico, an American territory, had earlier beaten Colombia and Algeria in their capital and didn't drop a single set throughout the tournament.

Colombia finished second with a record of two wins and one defeat and finished by beating the Algerians, who ended without a win, 25-16, 25-12, 25-18.

That kept alive their chances of reaching the Olympics but Puerto Rico would then end their hopes.

All 12 spots in the women's volleyball tournament at Rio 2016 have now been filled, with the Puerto Rico event running alongside another qualification tournament in Tokyo.

Italy, The Netherlands, hosts Japan and South Korea all qualified in the 2020 Olympic host city, to join seven countries already assured of a place.

Russia won the European qualifier with Argentina progressing from South America, the United States from North America and Cameroon from Africa.

Action in Rio will take place at the Ginásio do Maracanãzinho venue between August 7 and 21.