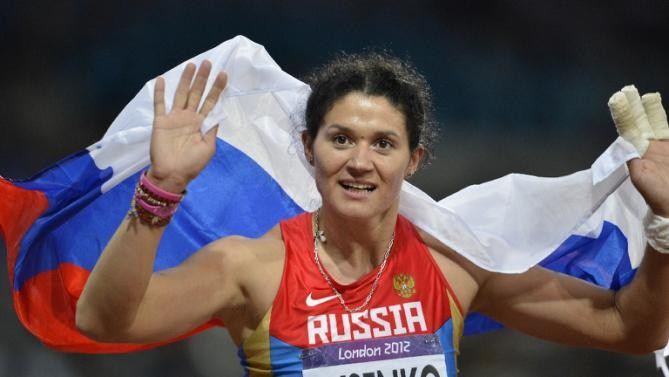 Russia’s Tatyana Beloborodova is facing the prospect of being stripped of her Olympic hammer throw gold medal she won at London 2012 after she was provisionally suspended by the International Association of Athletics Federations (IAAF) for retrospectively failing a drugs test.

A sample provided by Beloborodova after the 2005 World Championships in Helsinki has been re-analysed and has recorded a failed test, according to reports in Russia.

The 32-year-old, also a two-time world champion and who was known as Tatyana Lysenko until 2014, served a two-year drugs ban from 2007 to 2009 after she tested positive for steroid 6α-methylandrostenediol.

She could now face a lifetime ban and losing her Olympic gold medal.

Beloborodova had thrown an Olympic record of 78.18 metres to take the women’s hammer title at London 2012,

If she is stripped of her Olympic medal, Poland's Anita Włodarczyk, the current world champion, would be upgraded to gold, and Germany's Betty Heidler promoted to silver.

China's Zhang Wenxiu would be moved from fourth to bronze medal position.

Beloborodova may also be stripped of the European Championships title she won at Gothenburg in 2006.

The former world record holder won the women’s hammer throw gold at the 2011 World Championships and  at the event in the Russian capital Moscow two years later.

She is among the list of 33 Russian athletes to have won a medal in the Olympics or World Championships to have tested positive for banned performance-enhancing drugs since 2004.

A total of 26 of them are women

In many cases, the athlete has been able to keep their medal as they tested positive several years after the event.

The news marks another embarrassment for the All-Russia Athletic Federation, which remains suspended by the IAAF following the publication of the World Anti-Doping Agency Independent Commission reports, which uncovered the presence of a state-supported doping regime in the nation.

A decision on the ARAF’s reinstatement is due to be made by the IAAF Council in May.

If the ruling does not go in their favour, their athletes will miss out on competing at this summer’s Olympic Games in Rio de Janeiro.

Rune Andersen, the Norwegian leading the Taskforce that is overseeing Russia's reinstatement, said they had shown "considerable progress" in the wake of its suspension in November but admitted there was "significant work still to be done to satisfy the conditions".

Beloborodova’s failed test comes after cutting edge technology enabled the sport’s governing body to identify adverse findings from 28 athletes after the re-testing of stored urine samples from the 2005 and 2007 World Championships in Helsinki and Osaka respectively.

Beloborodova’s team-mate Tatyana Andrianova was stripped of the 800 metres bronze medal she won at the competition in Helsinki in December of last year.

The IAAF had confirmed she had tested positive for banned anabolic steroid stanozolol from a sample taken at the event.

Last month, Russia's Sergey Kirdyapkin was stripped of his Olympic medal he had won in the 50 kilometres walk at London 2012 for doping.

Elena Lashmanova, another athlete coached by Viktor Chegin, who has now been banned for life, had won the women's 20km race at London 2012 and has been allowed to keep her gold medal, despite testing positive herself in 2014.

Yuliya Zaripova is set to be stripped of the gold medal she won in the 3,000 metres steeplechase because of doping and Mariya Savinova, the 800m gold medallist, is also under investigation and expected to be disqualified.