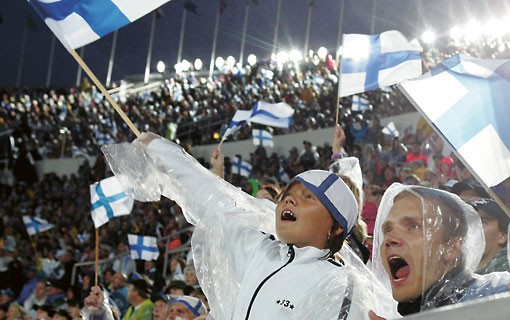 “Cutting edge” technology has enabled the International Association of Athletics Federations (IAAF) to identify adverse findings from 28 athletes after the re-testing of stored urine samples from the 2005 and 2007 World Championships in Helsinki and Osaka respectively.

The re-analysis of these samples has been ongoing for some time, and was started well before the most recent allegations regarding doping made against the IAAF by the German television company ARD and The Sunday Times in Britain.

In March 2013 the IAAF announced six retrospective positives from the samples, which had been stored “in anticipation of new scientific developments”, and a second analysis “using the latest technology available” has now revealed 32 previously undetected adverse samples from the 28 athletes.

They are refusing to name them publicly, however.

“Due to the legal process, none of these athletes can be named yet,” today’s IAAF announcement said.

“A large majority of the 28 are retired, some are athletes who have already been sanctioned, and only very few remain active in sport.”

Those active athletes have been provisionally suspended, and the IAAF has confirmed “none of the athletes concerned will be competing in Beijing” - where this month’s World Championships are due to open on August 22 and take place until August 30.

The analysis has been enabled by the new World Anti-Doping Agency (WADA) Code, which extended the period during which samples can be tested from eight to ten years.

The IAAF’s retesting strategy, which began in 2005, the year of the Helsinki World Championships, has involved long-term storage of samples at the Swiss Laboratory for Doping Analyses (LAD), the WADA-accredited laboratory in Lausanne.

“We are at the cutting edge of the fight against doping,” said Martial Saugy, Director of LAD.

“The latest scientific breakthroughs in anti-doping technology and analysis have been employed in the reanalysis of these samples to allow us to find previously undetectable substances.

"In our 10-year partnership with the IAAF we have been using every scientific advance and legal opportunity at our disposal to catch the cheats.

"The IAAF and the International Olympic Committee, working in cooperation with the LAD, clearly showed the way 10 years ago and other anti-doping organisations and sport Federations, on WADA’s recommendation, are now considering or have started implementing such a retesting policy.”

The IAAF release concluded: “The IAAF is committed to use every means at its disposal within the World Anti-Doping Code to root out the cheats, however long it takes.”

At the time of the 2005 World Championships in Helsinki, two athletes tested positive.

They were Indian discus thrower Neelam Jaswant Singh, who was found positive for the stimulant pemoline, and Vladyslav Piskunov, a Ukrainian hammer thrower, who failed a test for the anabolic steroid drostanolone.

Singh received a two-year ban, while Piskunov received a life ban from athletics as this was his second offence.

Five athletes were stripped of medals as a result of the IAAF's re-testing programme.

Belarusian's Nadzeya Ostapchuk and Ivan Tsikhan lost the gold medals they won in the shot put and hammer respectively.

Russia's Olga Kuzenkova, meanwhile, had the gold medal she had won in the women's hammer taken away.

Another Belarussian,  Vadim Devyatovskiy, was stripped of the silver medal he had won in the hammer behind Tsikhan.

The other athletes retrospectively disqualified was Belarusian Andrei Mikhnevich, who had finished sixth in the shot put.

It is believed that many of the new cases also involve athletes from former Soviet Union countries.

There are no British athletes involved.

Among the gold medallists at the Championships was Russia's Tatyana Tomashova, winner of the 1500 metres.

Tomashova was suspended by the IAAF for two years on the eve of the 2008 Olympics in Beijing for allegedly manipulating her urine samples.

Both were coached by Viktor Chegin, who last year was fired by fired from the Russian team following an investigation by the Russian Anti-Doping Agency.

Other winners at the Championships in Helsinki included America's Justin Gatlin, winner of the 100m and 200m, and Rashid Ramzi, who completed the 800m and 1500m double.

Gatlin received a four-year ban in 2006 after testing positive for testosterone - the second suspension of his career - but is now back running faster than ever and is one of the favourites for a gold medal at Beijing later this month.

Ramzi, meanwhile, was stripped of the Olympic 1500m gold medal he won at Beijing 2008 after testing positive for the banned blood-boosting substance CERA.

Osaka in 2007, meanwhile, had been labelled "drug-free" by the IAAF as there were no positive tests at the time.

The winners there, however, included Tsikhan - already stripped of the gold medal he won in the hammer at Helsinki - and Russia's Olga Kaniskina, winner of the women's 20km walk and another athlete coached by Chegin.

The star of the Championships was American Tyson Gay, winner of three gold medals, the 100m and 200m, as well as being a member of the US 4x100m relay.

In 2013 he was banned for a year after admitting doping - leading to him being stripped of the Olympic silver medal he had won in the 4x100m relay at London 2012 - although be blamed it on an unspecified third party.