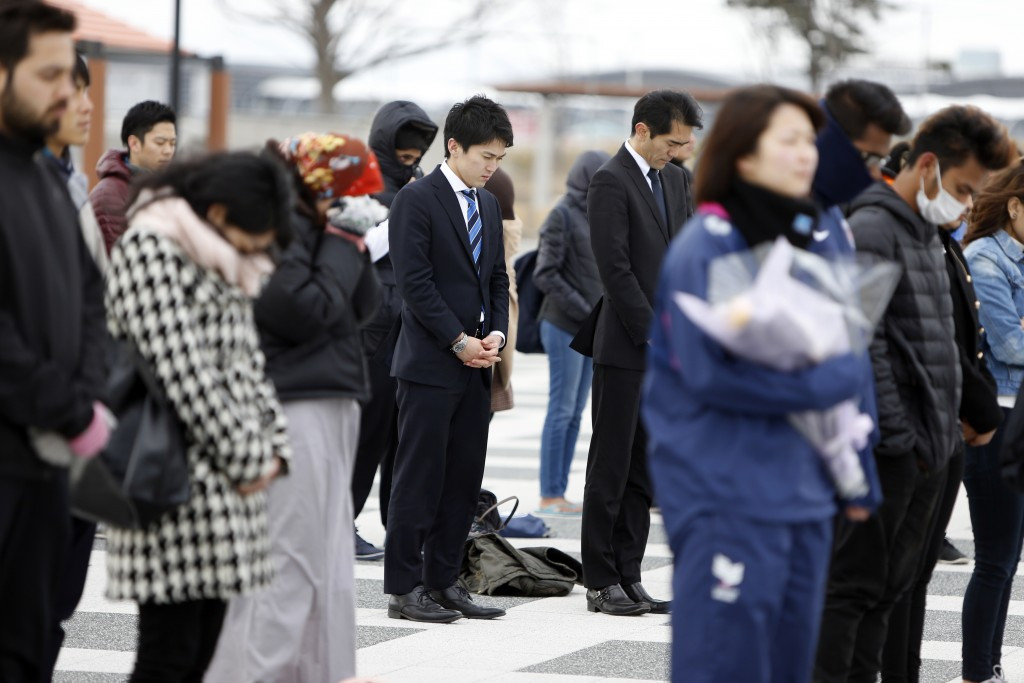 The pair visited Iwanuma in Tōhoku, an area particularly hit by the natural disaster on March 11, 2011.

With a magnitude of 9.0, the earthquake was the fourth most powerful recorded since records began, and was the cause of tsunami waves which caused destruction along the east Japanese coast.

In addition, the earthquake caused nuclear meltdowns at reactors in Fukushima, with the total death toll standing at nearly 16,000.

Both Takaya and Chida took part in this year's United Nations Office on Sport for Development and Peace (UNOSDP) Youth Leadership Camp in Tōhoku, where they spoke about a relationship between Tokyo 2020 and the reconstruction effort in the region.

They also took part in a memorial service to pay their respects to those lost.

"During the early phase of the bid phase, Tokyo 2020 did not mention much about what happened in Tōhoku," said Takaya.

"Later in the bid lifecycle, however, we knew that we would need a convincing message on why Tokyo should host the Games.

"Which is exactly what we delivered in a presentation at the IOC (International Olympic Committee) Session in Buenos Aires [in 2013].

“Our message was that Tokyo 2020 would become a vivid demonstration of the power and values of sport in the lead up to the Games and beyond.

"Ever since the tragic event, Japan rediscovered the significant role that sport and athletes could play in our lives.

"We wanted to contribute towards promoting the Olympic Movement by raising the profile of athletes and helping to secure the place of sport and Olympism in this fast-changing world.

"The spirit remains at the heart of ourselves even today.

"That is even more true in this region.

"Believing in the power of sport, Japanese are passionate about hosting the Games and welcoming the world in 2020.

"We will keep exploring what sport and athletes can play in our society and tell international audiences our stories.

"It’s a privilege to be a part of the responsibility as a member of Tokyo 2020."

Chida, won won his silver medal for Japan in the team event at London 2012, also has a team bronze medal from the 2010 World Championships in Paris.

His home city of Kesennuma lies on the East Coast and large parts were destroyed by the earthquake.

"When the earthquake was hit on 11 March, I was in Germany to participate in a competition there," he said.

"Tragic pictures delivered through TVs broke my heart, and I was never able to focus on my competitions.

"Knowing that sport can practice when you have clothing, food and housing, I felt powerless and even thought that I might quit competing.

“When I brought back a medal to my hometown Kesennuma city, a very local place in the area where we usually see only less than ten people at a station, I saw more than 10,000 people waiting for my arrival.

"All those people came over to see me to say congratulations, and seemed to be very excited.

"I never thought I would be able to give them such an excitement and bring them all together.

"I can say, sport has the power to unite people even such a challenging time."

The UNOSDP camp, which lasts for 10 days, is due to finish tomorrow.

It forms part of the Sport for Tomorrow programme, an initiative of the Japanese Government to promote sports to more than 10 million people in 100 nations between 2014 and 2020, the year when Tokyo will host the Summer Olympic and Paralympic Games.

The goal is to spread values learned through sports and increase awareness of the Olympic and Paralympic movement to people of all generations worldwide.