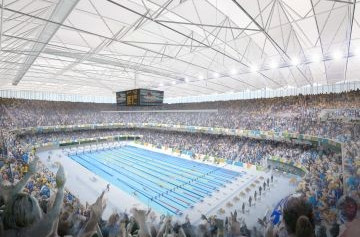 Rio 2016 remain confident that the Olympics Aquatics Stadium will be ready in time to stage a swimming test event in April following concerns raised by the International Swimming Federation (FINA) that it may have to be held elsewhere due to not being fully completed in time.

FINA executive director Cornel Marculescu has speculated that the event, due to take place from April 15 until 20, could instead take place at the nearby Maria Lenk Aquatics Centre, the venue due to stage diving and synchronised swimming during the Olympics in August.

An artificial ventilation system is still to be installed at the pool deck in the Olympic Aquatics Stadium and many other infrastructural elements remain yet to be finalised.

The Maria Lenk Centre, also situated within the main Olympic cluster in Barra de Tijuca, has a 50 metres pool, meaning competition could - as a last resort - be held there, instead of at the Aquatice Stadium.

The Aquatics Stadium is also due to host water polo during the Olympics.

The prospect of the Stadium not being ready in time for the test has been downplayed by Brazilian officials, however.

"We're fully confident all will be ready for the swimming test event as planned in the new Olympic Aquatics Stadium," a spokesman told insidethegames.

As yet, there remain no concerns the Olympic Aquatics Centre will not be ready for the Games, which are due to open on August 5.

Marculescu awarded it 8.5 marks out of 10 afterwards.

There remain concerns among many Federations, however, about the status of several venues.

International Cycling Union President Brian Cookson told insidethegames yesterday that delays in the construction of the Velodrome are so tight that the planned test event from April 29 until May 1 may have to be cancelled.

The event has already been pushed back once from its initial date of March 18 to 20.

Federations representing canoe sprint and rowing have raised fears over the slashing of a floating grandstand at the Lagoa Rodrigo de Freitas.

FINA has also raised similar concerns after seating was cut in the swimming venue.

It has also emerged this week that Rio are scrapping specific seating for many sports, sparking fears spectators will face a free-for-all.

Badminton, boxing, equestrian, hockey, rugby sevens, shooting, table tennis and weightlifting are among those set to be affected.