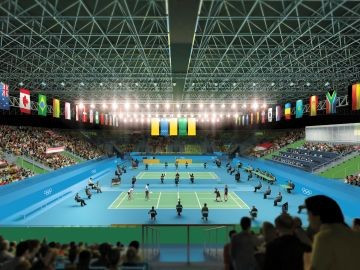 Spectators who have bought tickets for this year's Olympic Games in Rio de Janeiro will not be assigned specific seats for many events after Brazilian officials decided to introduce a general admission policy.

The news was revealed to client groups in an update sent by Rio 2016 yesterday.

The decision affects all the Deodoro venues and the Riocentro Pavillions.

Rio 2016 also plan to implement the policy at the Lagoa Rodrigo de Freitas, which will stage canoe sprint and rowing, and the Sambadrome, the purpose-built parade area in downtown Rio de Janeiro, which is due to stage archery and the end of the marathon.

It is also planned to have general admission for those with the cheapest category D tickets at the Estádio Olímpico João Havelange, which is due to host athletics and football.

"In most cases, each ticket will be assigned a block or sector, but will not be assigned a specific row or seat," Rio 2016 said in the ticketing update.

"Rio 2016 is confident that the venues for the first ever Olympic and Paralympic Games in South America will be full of Brazilian energy and spirit, creating an amazing atmosphere for all spectators."

There are fears, however, that by not assigning specific seats to spectators it could disrupt events.

"It is a little strange because it puts added pressure for clients to be seated and might not assist with a full stadia policy as clients will leave gaps between each other and can cause interruption during the event as volunteers ask people to move," said Daniel Beniston, the managing director of Kingdom Sports Group, an authorised ticket reseller.

The fear is that ticket sales for Rio 2016 are going more slowly than predicted with Brazil in the midst of its worst recession for more than 20 years.

Only around 50 per cent of the 4.5 million Olympic tickets accessible for Brazilians have been sold, Rio 2016 admitted last month.

It is even worse for the Paralympic Games, where only 10 per cent of the tickets have been bought.

A Rio 2016 spokesman said: "Following consultation with stakeholders, Rio 2016 has decided to implement a general admission ticket system within ticket categories in some venues for the 2016 Games.

"In Brazil general admission is a system routinely used in the majority of major sporting events.

"The general admission system, in which spectators do not have a pre-allocated specific seat, allows for a more flexible movement of spectators inside the venues and contributes to creating a vibrant and positive atmosphere among the fans.

"Spectators will be able to enter and exit the venues more quickly, while stewards and volunteers will be on hand to help spectators find the best available position within their ticket category section of the stands."

The move is the latest cost-cutting measure introduced by Rio 2016.

The Zika virus outbreak is also causing disquiet among many foreign travellers, some of whom insidethegames understands are re-considering plans to attend the Olympic and Paralympics.

Earlier this week, meanwhile, it was revealed that Rio de Janeiro Mayor Eduardo Paes had written to the International Olympic Committee admitting that a vital metro-line due to link the main hub at Barra de Tijuca may not be finished in time for the Olympics, which are due to open on August 5.