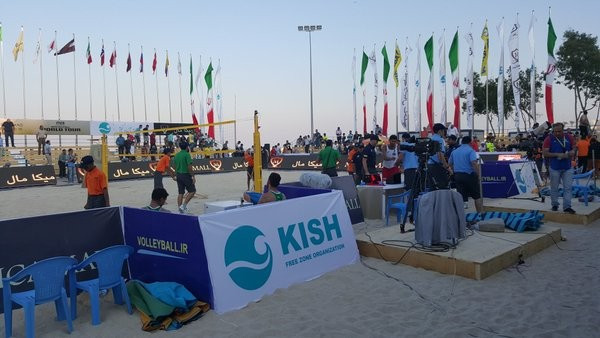 Human Rights Watch has criticised the International Volleyball Federation’s (FIVB) claim that a “misunderstanding” with security personnel was the cause of female spectators being turned away from the World Tour leg in Kish Island in Iran, amid claims that women trying to enter were part of a "political stunt".

Iranian authorities had promised to lift their ban on women attending matches for the duration of the male only competition, but female fans were stopped by security officials on their way into the stadium for yesterday’s morning session.

It was alleged that the women were told they were "forbidden" to enter, with a group then gathering on the roof of a coffee shop in an attempt to watch the competition.

However, several photos have emerged of women present in the stadium.

The FIVB have expressed their concerns regarding the reports, but have said they are investigating claims the arrival of a large group of women was a "politically motivated stunt".

“The FIVB is pleased to confirm that for the most part women have been allowed to attend the men's beach volleyball event - a first in recent years," the governing body said in statement.

“The FIVB, however, is concerned by events on Tuesday afternoon when a group of women arrived together and were subsequently asked to leave by the security personnel.

“The FIVB is investigating the situation, including allegations that the arrival of a large group of women was a politically motivated stunt.

“Whatever the case, women spectators were once again attending the event on day three and the FIVB will continue to monitor the situation to ensure that the event is open to all members of the public.”

Yesterday, the governing body had claimed there had been a "slight misunderstanding" with security personnel which was resolved, while stating the event represented "significant progress" considering the complete ban which had previously been in place.

Minky Worden, the director of global initiatives at Human Rights Watch, has stated the incident is unfair on the women who are attempting to attend and shows flaws within the FIVB’s strategy.

“Brave Iranian women who took the FIVB at its word were turned away at the turnstiles this week, that is a black eye for the sport of volleyball, and a setback for women’s rights in Iran,” she said.

“This sorry episode highlights the shortcomings of the FIVB’s strategy with the Iranian government, and contradicts their claims that all Iranian fans are welcome.

“This episode is far more serious than a slight misunderstanding, since it spotlights the broader risk the 2012 ban imposed on Iranian women who seek to attend volleyball matches.

“It is not fair to ask women to come to the matches without protection and planning for the likelihood that women would have trouble at the gates as in past years.”

The case comes after a 27-year long rule banning women from attending football matches in the Islamic nation was controversially extended to volleyball in 2012.

She was arrested for "propaganda against the regime" after attending an FIVB World League match in Tehran, and spent 151 days in Evin prison before she was released and charges were eventually dropped.

Initially the FIVB were criticised for a lack of action but vowed to work with Iranian authorities, and promised not to award any more events to the country until the ban was lifted.

In addition to the World Tour event, Iran were granted hosting rights to World League matches in apparent violation of this decision.

Worden has argued that due to the FIVB granting Iran the opportunity to stage international matches, the governing body need to ensure that the country abide by international rules and lift the ban.

In a statement sent to insidethegames yesterday, the FIVB claimed they had worked to ensure the safety of spectators and female spectators would be able to attend throughout the duration of the event.

"The FIVB has worked tirelessly with the relevant authorities in Iran to ensure the Kish Island Open is a free event which is accessible to all members of the public and to ensure the safety of all spectators and players," the body stated.

"We are pleased to say this has been a success, although there was a slight misunderstanding by security personal on Tuesday [today] morning, which has now been resolved.

"The FIVB continues to receive assurance by the organisers that the Kish Island Open will be a free to access open event for all.

"Our policy is one of engagement and focusing on inclusion through sport for all not threat of isolation.

"We continue to look forward to welcoming people of all ages and genders to this first ever FIVB Beach Volleyball World Tour event in Iran."

The FIVB had not managed to have the ban lifted before the start of the tournament, despite it being a target they were "hopeful" of achieving after awarding the event to Iran last November.

But assurances were provided that women would be able to watch the event on Kish, a 91.5 square kilometres island in the Persian Gulf.

Criticism will grow if the ban is not completely lifted before Rio 2016, a deadline repeatedly cited by the FIVB.

On the court, Russian pair Nikita Liamin and Dmitri Barsouk upset the home crowd with a 17-21, 21-15, 16-14 over Iran duo Saber Houshmand and Abbas Pourasgari as the knock-out phase began.

Top seeds Markus Böckermann and Lars Flüggen wrapped up top spot in Pool A to skip the first elimination round and head straight to the second stage tomorrow.

The Germans saved one match point against Austrians Thomas Kunert and Christoph Dressler before eventually winning 21-16, 18-21, 19-17.