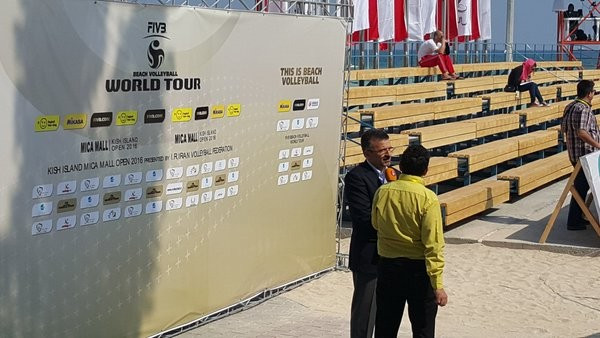 Female spectators were turned away from the International Volleyball Federation (FIVB) World Tour leg in Kish Island today, despite Iranian authorities having promised to lift their ban on women attending matches for the duration of the tournament.

Women hoping to watch this morning's action in the male only competition at the Persian Gulf resort were stopped by security officials on their way into the stadium.

They were allegedly told they were "forbidden" to enter.

According to tweets published by Minky Worden, the director of global initiatives at Human Rights Watch, the campaign group which has been leading calls for the ban to be lifted, women were then allowed to watch the match from the roof of a coffee shop by its owner.

He even told men to move from their seats as they could access the stadium instead, it is claimed.

The FIVB admit there was a "slight misunderstanding" with security personnel this morning, but claim this has now been resolved and full access has been restored.

Several photos have emerged of women present in the stadium, although accounts differ as to how many are actually there.

The FIVB claim that, despite the problems today, the event marks significant progress considering the complete ban which existed in the past.

"The FIVB has worked tirelessly with the relevant authorities in Iran to ensure the Kish Island Open is a free event which is accessible to all members of the public and to ensure the safety of all spectators and players," the body claimed in a statement sent to insidethegames.

"We are pleased to say this has been a success, although there was a slight misunderstanding by security personal on Tuesday [today] morning, which has now been resolved.

"The FIVB continues to receive assurance by the organisers that the Kish Island Open will be a free to access open event for all.

"Our policy is one of engagement and focusing on inclusion through sport for all not threat of isolation.

"We continue to look forward to welcoming people of all ages and genders to this first ever FIVB Beach Volleyball World Tour event in Iran."

A 27-year long rule banning women from attending football matches in the Islamic nation was controversially extended to volleyball in 2012.

ATTN @FIVBVolleyball: #Iran's women were promised "no turning away at the turnstiles." But that IS what happened. Ball in your court to act— Minky Worden (@MinkysHighjinks) February 16, 2016

Ghavami, arrested for "propaganda against the regime" after attending an FIVB World League match in capital Tehran, spent 151 days in Evin prison before she was released and charges were eventually dropped.

The FIVB were initially criticised for a lack of action but vowed to work with Iranian authorities, and promised not to allocate any more events to the country until the ban was lifted.

Both the World League matches and the World Tour event were awarded in apparent violation of this decision.

FIVB general director Fabio Azevedo, the official responsible for negotiating with the Iranians, told insidethegames in October that they were prioritising a carrot rather than a stick approach to apply pressure to the Iranians to change their approach, a method they still believe will prove successful.

They did not manage to orchestrate a lifting of the ban before the start of the tournament, however, a target they claimed to be "hopeful" of achieving after awarding the event to Iran last November.

But assurances were provided that women would be able to watch the event on Kish, a 91.5 square kilometres island.

Criticism will grow if the ban is not completely lifted before Rio 2016, a deadline repeatedly cited by the FIVB.

With Italian twins Matteo and Paolo Ingrosso also winning both their matches, it sets up a winner takes all encounter between the Pool C rivals on Wednesday.