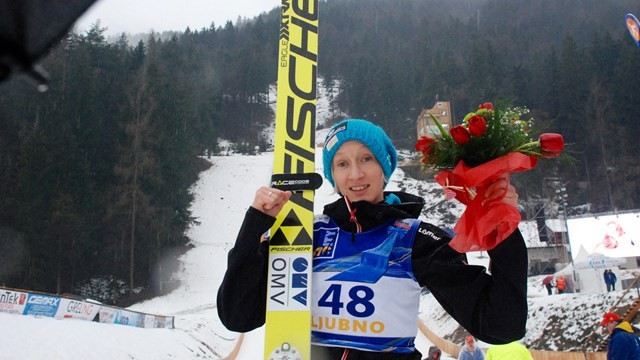 Last year’s overall World Cup winner finished in a lowly 13th place in yesterday’s competition but looked close to her best form by producing an opening round effort of 91 metres on the Slovenian hill.

Although it placed her fourth at the halfway mark of the competition, the 32-year-old jumped out to 95m to end the competition with a winning tally of 264 points.

“I changed a lot, because my coaches told me so after the competition yesterday,” said Iraschko-Stolz, whose last triumph came at Nizhny Tagil in Russia in December.

“I always had mixed feeling about Ljubno, even though I won here before.

“I didn't expect this today at all.”

Slovenia’s Maja Vtic, after her maiden World Cup win yesterday, was able to finish second after securing 260.3 points in front of a home crowd.

Austria’s Chiara Hölzl was able to make it a rare World Cup event without Japan’s Sara Takanashi earning a podium finish, as she ended on 259 points.

The Japanese star, who suffered her first defeat in 11 competitions yesterday, can seal the overall World Cup win at next weekend’s event in Lathi as she boasts a 381 point lead over Iraschko-Stolz.

However, she had to make do with a fourth placed finish today.

Slovenia’s Peter Prevc continued his domination of the men’s World Cup by winning his second competition of the weekend at Vikersund, Norway.

The Ski Flying world champion lept out to 237m and 249m to end the competition as the clear victor on 469 points.

He now is just two wins behind Gregor Schlierenzauer’s record for a total season, with the Austrian managing 13 in 2008/9.

Austria’s Stefan Kraft finished in second position on 461.6 points, while Norway’s Andreas Stjernen received a total of 459.7 to complete the podium positions.

The German continues to fall further behind Prevc in the overall standings though, as he has only 1002 to the Slovenian’s tally of 1574.