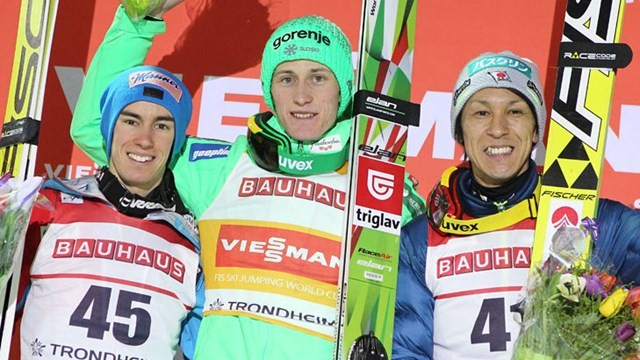 The International Ski Federation (FIS) World Cup leader headed into the competition just one win adrift of his compatriot Primoz Peterka, who secured the last of his 15 victories in the event in Garmisch-Partenkirchen back in 2003.

Prevc proved able to maintain his stunning recent form, which has seen recently seen him become the Ski Flying world champion and Four Hills tournament winner, to draw level will that tally.

It saw him finish comfortably clear of Stefan Kraft, the 2015 Four Hills winner.

"It wasn't easy, you also needed a bit of luck and I had that," said Prevc.

"But I was also jumping really well.

“I don't think that the wind has less influence because of my style of jumping, even if it might look like this way.

“Regarding the overall World Cup, we are only about in the middle of the season, I still have to be patient and show good performances until Planica.”

Japan’s Noriaki Kasai delivered the jump of the day, the 43-year-old setting a hill record of 143m.

The distance catapulted Kasai up to third position on the leaderboard, despite a lowly first effort of 127m, finishing on 266.8.

Austria’s Michael Hayboeck ended just outside of the podium places on 256.4.

The poor result saw Freund fall 443 points behind Prevc in the overall World Cup standings, with the Slovenian now on a total of 1,324.

Vikersund is now set to host the next World Cup competition on Friday (February 12), a re-arranged event following the cancellation of last week's event in Holmenkollen.