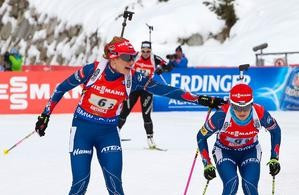 Johannes Thingnes Bø and brother Tarjei helped Norway secure gold in the men’s 4x7.5 kilometres relay event on the final day of the International Biathlon Union (IBU) World Cup in Presque Isle in the United States.

The Norwegian quartet, also including Lars Helge Birkeland and Erlend Bjoentegaard, were languishing in the middle of the field until Johannes took control on the third leg, elevating his team into second place.

Tarjei then took over and his quick shooting allowed him to move to the front of the pack before crossing the line in first place to claim a superb comeback victory.

Germany, whose team featured Erik Lesser, Andreas Birnbacher, Daniel Boehm and Benedikt Doll, rounded off the podium as they finished a further 12.5 seconds behind the eventual winners.

It proved to be a similar story in the women’s event, which was brought forward a day owing to sub-30 zero temperatures forecast in Presque Isle tomorrow, as current individual World Cup leader Gabriela Soukalová and team-mate Veronika Vitkova guided the Czech Republic to gold.

Along with team-mates Eva Puskarcikova and Lucie Charvátová, the Czech quartet finished the 4x6km race in 1:07:11, 25.2 seconds in front of Iryna Varvnyets, Natalya Burdyga, Yuliia Dzhima and Olena Pidrushna, who powered home in the final leg to ensure the Ukraine took silver.

The parallels with the men’s race continued as Germany picked up their second bronze thanks to Franziska Preuß, Luise Kummer, Miriam Goessner and Karolin Horchler as the race ended in near darkness.

“It has been a fantastic weekend; I was feeling really good,” Soukalová said.

“I never remember that I have ever been in this shape.”

The next IBU World Cup event on the calendar is due to place in Khanty-Mansiysk in Russia from March 16 until 20.

Before that, however, is the World Championships, scheduled to take place from March 3 until 13 in Oslo.