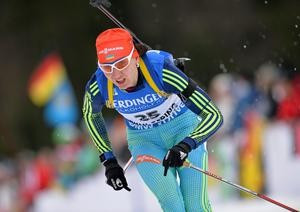 Ukraine's Olena Pidhrushna secured her first individual International Biathlon Union (IBU) World Cup victory since taking a break from the sport as she powered to gold in the women’s 7.5 kilometres sprint race in Canmore in Canada today.

The 29-year-old, who missed last season to have a baby, shot clean on her way to clocking 19min 56.9sec to seal a superb win ahead of Poland's Krystyna Guzik and Italy's Dorothea Wierer.

Guzik had to settle for the silver medal as she finished 7.5 seconds adrift of Pidhrushna , while Wierer was a further 4.9 seconds behind in third.

The result handed Pidrushna, the 2013 world sprint champion and an Olympic gold medallist in the 4x6km relay at Sochi 2014, a rare triumph following her decision not to compete last year and saw her climb to seventh on the overall leaderboard on 500 points.

Wierer is now the closest challenger to current leader Gabriela Soukalova of the Czech Republic, who managed to cling on to top spot despite another race in which she failed to earn a podium place.

Soukalova, a disappointing seventh today, leads the way on 715 points, 103 ahead of Wierer.

“I knew I was in third after the standing stage; then all of the sudden my team-mates were shouting along the tracks shouting that I could win; it was very surprising!” Pidrushna said.

“I think our training camp in Antholz [in Italy] before coming here helped me; I definitely am not struggling with the wind, just the time change.”

The race began amid tricky conditions, with strong wind making clean shooting difficult early on as Soukalova and Finland’s Kaisa Mäkäräinen were both given penalties at the opening prone stage.

Pidrushna had no such worries but the Czech came storming back, giving herself every chance of clinching a podium spot by shooting clean in the standing phase.

Her challenge faltered late on as Guzik sprinted out in front, establishing a 16.1 second advantage over the Polish-born Pidrushna.

Pidrushna, who served as Ukraine's Deputy Minister of Youth and Sports during her break, put in a rapid display on the skis.

She clawed her way back into contention before overtaking Guzik and accelerated  towards the finish, leaving the rest of the field in her wake on the way to a thrilling victory.

The event in Canmore is due to continue tomorrow with the men’s 15km and women’s 12.5km mass start races.