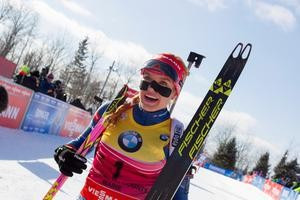 Czech Republic’s Gabriela Soukalová made it two wins in as many days at the International Biathlon Union (IBU) World Cup in Presque Isle, claiming victory in the women’s 10 kilometres pursuit.

Italy’s Dorothea Wierer had held a two-second lead over Soukalová, but three penalty loops in the final stage saw finish ninth as her Czech counterpart shoot clean for the win.

"It is awesome like yesterday; the atmosphere here is a bit easier with a few less people," said Soukalová.

"Sometimes it is hard with all of the noise in the big stadiums."

In the men’s 12.5km pursuit, France’s Martin Fourcade came from behind, cleaning the final standing stage to triumph with two penalties in 31:04.4.

Yesterday’s sprint winner Johannes Thingnes Bø of Norway was the runner-up, 24.8 seconds back after a second penalty in the final standing stage saw him drop from top spot.

Third place went to Russia's Anton Shipulin 1:11.5 behind with two penalties, beating Austria’s Simon Eder to the final spot on the podium.

Fourcade’s second penalty in the first prone stage saw him fall out of the top three, but he recovered with a clean stage in the first standing to move into second position.

Leader Bø had two penalties in the final standing stage before Fourcade cleaned and pulled away from the Norwegian for victory.

"He was my idol as a child, watching him on TV," said Fourcade.

Action in Presque Isle is due to conclude tomorrow with the men's 4x7.5km and women's 4x6km relays.