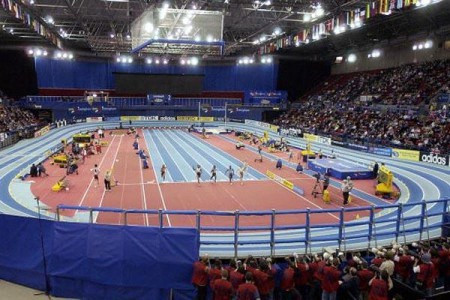 Valentine's Day next year has been set as the target for Russia to have its suspension from international athletics lifted, it has been revealed.

The date has been set by Mikhail Butov, general secretary of the All-Russia Athletics Federation (ARAF).

The Russian Winter meeting is due to take place on that date at the CSKA Arena.

"This competition is scheduled for February 14," said Butov.

"I hope we’ll solve our problems until that time and we’ll able to hold full-international meeting as it would be jubilee 25th Russian Winter."

Butov is a member of the International Association of Athletics Federations (IAAF) ruling Council and presented Russia's case at the emergency meeting held on Friday (November 13).

His plea for the ARAF not to be suspended was unsuccessful as the Council voted 22-1 to provisionally suspend them.

Butov was not allowed to vote.

"Difficult and sad day ... We’ll fight on," he wrote on his Facebook page afterwards.

"Many thanks for all national team athletes for your support.

"I promise I will do everything possible for you.

"I am sure the logic will be higher than emotions when the IAAF Council will make final decision."

An inspection team led by Rune Andersen, a Norwegian independent international anti-doping expert, and three members of the IAAF Council who will be appointed in the next few days, will oversee things in Russia and try to establish a road-map for the return of Russia.

It is widely expected that Russia will have its suspension lifted before next year's Olympic Games in Rio de Janeiro.

The acting President of the ARAF, Vadim Zelichenok, confirmed after an emergency meeting today that they hope to have the suspension lifted by the IAAF within three months.

The meeting was attended by Russia's Sports Minister Vitaly Mutko.

"There were not very many issues on the agenda," said Zelichenok.

"The IAAF decision on ARAF’s suspension was read out.

"We discussed this decision and possible ways to overcome this situation.

"An anti-crisis plan was adopted,"

"It was confirmed once again that our key goal now is to ensure participation of Russian athletes in the Olympic Games and resume our status to give them a possibility to take part in all competitions."

Zelichenok is expected to step down from his position.

Among the candidates are expected to be Svetlana Masterkova, the 1996 Olympic 800 and 1500 metres gold medallist, who has announced plans to run.

Butov is another contender.

Tatyana Lebedeva, the five-time Olympic medallist, including gold in the long jump at Athens, who is now vice-president of the ARAF, appealed to the IAAF to help Russia eradicate its drugs problem.

"All together, we have to create strategy and educational programmes for athletes, coaches and doctors," she said.

"The IAAF has to help us, to share its experience but not put us in isolation when we have to solve this problem by ourselves only.

"We have clear recommendation from the IAAF to reform our Federation and we’ll do everything we have to do it as soon as possible.

"We’re ready for any changes, breaking up, creation of new charter or constitution.

"We’ll defend clean and innocent athletes even if in courts.

"All guilty persons will be punished."

Yelena Isinbayeva, the two-time Olympic pole vault champion, who had urged the IAAF not to punish clean athletes by banning Russia admitted she was "shocked by the decision" to suspend the country.

"This decision shows us once again an example of Western democracy," he said.

"Here it is the policy of double standards in the action.

"I told to Yelena and we decided to go and fight to the end.

"The truth is on our side.

"It’s very important to Yelena to perform in Rio to prove her innocence, to show that we’re clean as well as all our sport."