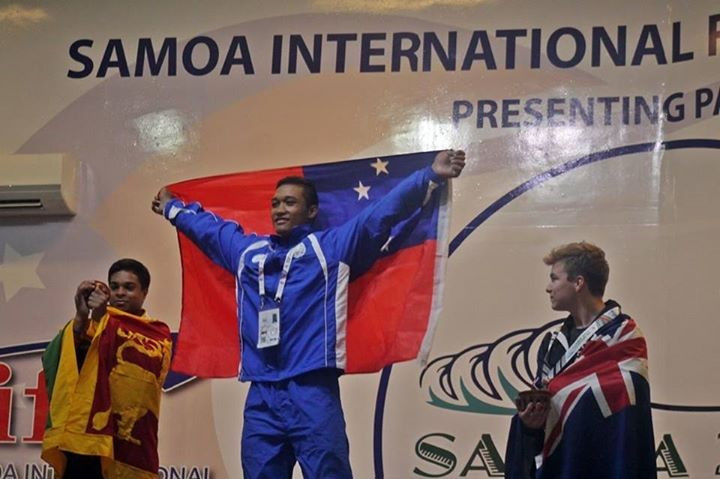 Maeu Nanai Livi claimed the host nation’s first gold of the 2015 Commonwealth Youth Games as he captured the boy’s 85 kilograms title to send the crowd into raptures on the final day of weightlifting competition here.

The Samoan hoisted a superb 113kg in the snatch event before lifting 140kg in the clean and jerk, handing him a commanding overall total of 253kg.

The result delighted the home crowd inside the impressive weightlifting venue as relief exuded from the supporters who were made to wait until the fourth day of action to see their nation stand at the top of the podium.

The hosts were then denied a second gold as Teo Samuel Jabriella of Malaysia clinched the girl’s over 69kg crown at the expense of Feagaiga Stowers thanks to a total of 186kg.

Jabriella produced the best lift in the snatch event as her effort of 103kg was 7kg more than her Samoan rival, although Stowers was given a lifeline in the clean and jerk when the Malaysian failed with her first two attempts at 100kg.

But she produced when it mattered, lifting a successful 103kg to finish with 186kg, ending Samoan hopes of snatching gold as Stowers was forced to settle for silver.

Cameroonian Rayssa Djifack Zomgoua claimed the final spot on the podium as she earned bronze with a total of 169kg.

In the other weight category to take place today, New Zealand’s Vernon Taylor relied on a snatch lift of 118kg to clinch gold ahead of Wales’ Jordan Sakkas and Isuru Senadeera of Sri Lanka in the 94kg competition.

Taylor’s winning total of 267kg was just 3kg more than the Welshman, who edged his Sri Lankan counterpart to silver by virtue of a lower body weight.

Favourites Malaysia continued their monopoly of the squash tournament as they claimed all three doubles titles available today.

Fourth seeds New Zealand, comprised of Luke Jones and Abbie Palmer, enjoyed a similarly comfortable win in the bronze medal match thanks to a 11-8, 11-7 success against Scotland.

Mohd Farez Izwan and Marcus Wei Jie Sim were also in good form, topping the podium in the boy's doubles competition, although they were made to work hard for their triumph by Australian duo Alex Eustace and Joseph White before emerging with a 11-8, 8-11, 11-10 win.

India proved too strong in the mixed doubles tennis competition as the team of Dhruthi Venugopal and Sasikumar Mukund earned a straight sets victory over Scotland's Louie-Ada McClelland and Ewen Lumsden.

The Indian duo edged ahead in a tight contest by taking the first set 7-6, and enjoyed a more comfortable outing in the second, winning it 6-3 to get their hands on gold, while Papua New Guinea picked up bronze.

In archery, a sport Samoan Prime Minister Tuilaepa Aiono Sailele Malielegaoi won a Pacific Games silver medal in at the 2007 event in Apia, Bangladesh were another nation to win their first gold as Mohammad Tamimul Islam reigned supreme in the boy’s individual competition.

Indian Prachi Singh was victorious in the girl’s competition, ousting England’s Elizabeth Warner 6-2 in the final, while Nondiny Khan Shopna secured another Bangladeshi success as she won bronze by virtue of the same scoreline.