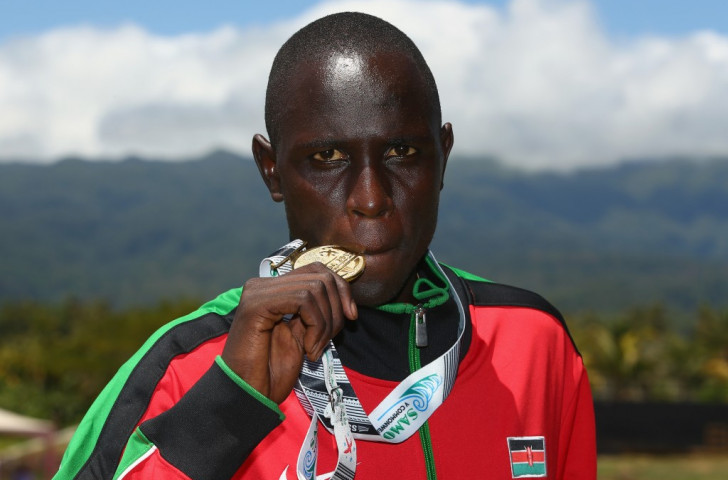 World youth champion Willy Kiplimo Tarbei of Kenya held off a late challenge from compatriot Kipyegon Bett to secure gold in the boy’s 800 metres on the final day of athletics at the 2015 Commonwealth Youth Games here today.

Tarbei, who claimed the International Association of Athletics Federation (IAAF) World Youth Championships 800m title in Cali in July ahead of his team-mate, clocked the fifth-fastest time of the year as he crossed the line in 1min 46.05sec.

In the battle of the top two boy’s 800m runners in the world, Bett led at the turn coming into the home stretch but Tarbei powered to the front late on, with the world youth silver medallist finishing in 1:46.15, while Scotland’s Ben Greenwood clinched bronze.

South Africa’s Tlotliso Gift Leotela confirmed his status as the Commonwealth Youth Games sprint king by completing the 100m and 200m double thanks to a wind-assisted time of 20.56sec, pipping England’s Toby Harries in a thrilling race.

The two competitors were neck and neck going to the line but Leotela just shaded it, ensuring he topped the podium for the second time at the event, with Harries winning silver and fellow South African Kyle Appel bronze.

Nigeria’s Idamadudu Praise Oghenefejiro stormed to the girl’s crown in 23.30 as Scotland’s Alisha Rees had to settle for silver, while Etim Aniekme Alphonsus sealed another sprint medal for the African country by taking bronze.

The day had started in perfect fashion for Kenya after they reigned supreme in both the boy’s and girl’s 3,000m races.

Compatriot Davis Kiplangat, silver medallist at the World Youth Championships in Cali in July, then led home a Kenyan one-two in the boy’s race as he narrowly beat team-mate Richard Kimanyan with a time of 7:59.56, with England’s Alex Yee coming through to take bronze.

There was more success on the track for Australia as Amy Harding-Delooze claimed gold in the girl’s 800m to seal the middle distance double as she surged to victory over two laps of the track in 2:06.84.

The 17-year-old, who took 1500m gold earlier on at the event in dramatic style by pipping Chemutai of Uganda on the line, delivered the perfect tactical race, keeping pace with the pack before kicking at the right time to finish ahead of Carys McAulay of Scotland and Abitha Manuel of India.

Jamaican Junelle Bromfield also picked up her second title of the Games as she won the 400m hurdles in 1:00.78 to add to her 400m crown, while Yamani Danansooriya Mudi of Sri Lanka secured silver and England's Niamh Emerson bronze.

The boy’s event saw Barbados pick up their first track and field gold as Rivaldo Leacock triumphed in an intriguing battle with Jauavney James of Jamaica by virtue of a time of 51.12, with Harrison Kimpton-Moss bagging bronze for Australia.

Mpho Katlego Tladi then built on his compatriot’s triumph in the boy’s 110m hurdles event, powering home in an impressive time of 13.50, with New Zealand’s Benjamin Collerton sealing silver.

Northern Ireland’s Benjamin Fisher, bronze medallist in the boy’s long jump, claimed his second medal of the Games as he rounded off the podium, taking third.

In the field, Jamaica’s Kevin Nedrick edged Werner Jakobus Visser of South Africa, gold medallist in the discus, with a throw of 20.12 metres to clinch the boy’s shot put title.

Australian Grace Robertson proved too strong in the girl’s shot put as she registered a best attempt of 16.39m, with England’s Sophie Merritt second and Indian Amika Das third.

That time saw them in front of Australia, while Samoa benefitted from a mistake from the English team to delight the home crowd with bronze.

Australia held off the challenge of Nigeria to take silver.