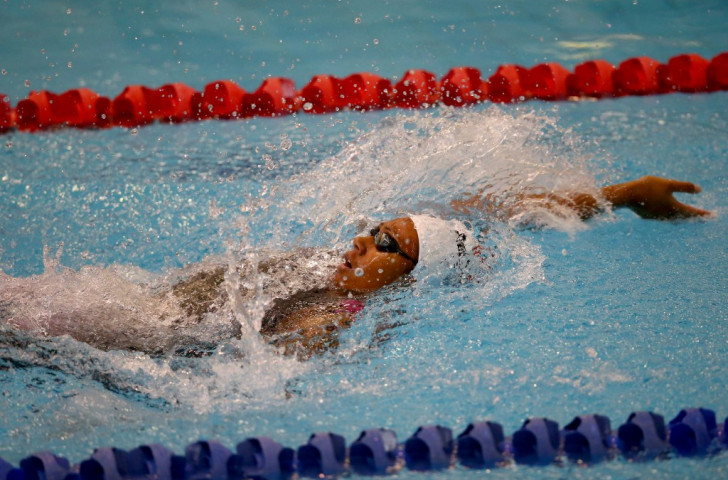 Fa’amausili won the event at the International Swimming Federation (FINA) World Junior Championships in Singapore in August and, although she could not quite match her record-breaking performance of 27.81sec this time around, she was able to claim the title thanks to a time of 28.74.

Her team-mate Gichard, who got the better of her in the 100m backstroke race yesterday, was forced to settle for silver, with Australian Gemma Cooney taking bronze.

The result handed Lewis his second medal of the Games after he topped the podium in last night’s 200m freestyle event as he proved too strong for the rest of the field once again, finishing comfortably ahead of Joe Litchfield of England and South Africa’s Neil Fair.

Lucy McJannett, part of the Australian 4x100m and 4x200m freestyle teams who secured gold in world junior record times at the World Junior Championships, maintained the momentum for her country, winning the girl’s 100m freestyle race in 55.34.

The success kept on coming for the Oceanian country as Vincent Dai’s time of 50.26 handed him the boy’s 100m freestyle gold, while Craig McLean of Scotland won a thrilling race for silver as he pipped England’s Lewis Clough to second place by a slender 0.02 second margin.

Australia then rounded off an outstanding day in the pool, sweeping both the boy's and girl's 4x200m relays.

The girl's quartet of Cooney, McJannett, Jack and Elyse Woods powered home in 8:08.24 to cruise to gold ahead of England and Wales, while Tristan Ludlow, Brayden McCarthy, Jack Cartwright and Lewis, who had already claimed two individual titles today, did it the hard way as they recovered from a slow start to clock 7:29.27.

England came home in second, while South Africa were some way adrift in third.

Elsewhere, South African Zane Waddell added the 50m backstroke crown to his 50m butterfly triumph on the opening day of the event with a time of 25.94, which was enough to beat Northern Ireland’s Connor Ferguson and Bayley Main of New Zealand.

England picked up their first title of the evening thanks to Layla Black, who edged a pulsating girl’s 100m breaststroke race in 1:10.06, narrowly in front of South Africa’s Kaylene Corbett, while Scotland’s Erin Robertson sealed bronze.

Malaysia also secured their maiden swimming gold at Samoa 2015 as Fu Kang Wong reigned supreme in a close boy’s 100m breaststroke race, holding off a late challenge from England’s Edward Baxter to clinch the title in 1:03.36.

South African James Isemonger bagged another medal for his nation as he won bronze.