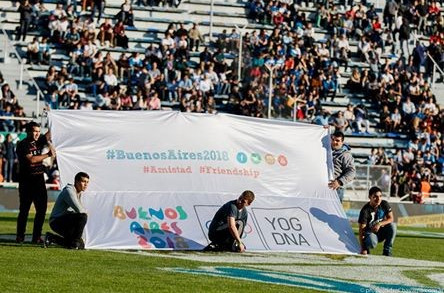 Identical numbers of men and women are set to compete at the Buenos Aires 2018 Summer Youth Olympics in what is set to mark the first time full gender equality has been achieved at any form of the Games.

The programme, which will include new "youth-oriented" events such as BMX freestyle, kiteboarding, beach handball and cross-country running, is part of a vision based around being "the most unique and youth-appealing Youth Olympic Games to date".

Record numbers of female and mixed events are included in part of a total projected field of 1,893 male and 1,893 female athletes all aged between 14 and 18.

“This is an excellent step forward," said International Olympic Committee (IOC) President Thomas Bach following an Executive Board meeting in Beijing at which the programme was officially approved.

"We have made history - to have equal numbers of women and men competing for the first time at an Olympic Games or Youth Olympic Games.

"As well as being another big step in the implementation of Olympic Agenda 2020, this is a great milestone for women’s sport and for the Olympic Movement as a whole.”

It has been a busy month for Argentinian organisers, which began with a presentation at the IOC Session in Kuala Lumpur during which they confirmed the dates for the quadrennial event had been pushed forward to October 1 to 12 in three years time in order to take advantage of warmer temperatures.

This was followed by a second inspection visit by the IOC Coordination Commission, after which the panel's chair Frankie Fredericks praised the "energy, passion and creativity" of the plans.

Further work has been done to develop the “cluster concept”, which will see four dedicated areas of the city integrating the sports competitions with sport initiations, sport showcasing, music, culture and Olympic education for local youth and families, it was reported, while a detailed outline of their "Learn & Share" programme was presented.

This will target not only attending athletes, but also schools nationwide through Olympic educational programmes.

More than 850,000 spectators and close to 100,000 young participants have been engaged in the Games this year across 163 sporting, cultural and educational activities across the city, it is estimated, while the Coordination Commission was particularly impressed with the impact of this promotional work.

“We are bowled over by the energy, passion and creativity of this team," said Fredericks, the Namibian IOC member who won four Olympic silver medals in the 100 and 200 metres at Barcelona 1992 and Atlanta 1996.

"They want to make the Youth Olympic Games 100 per cent unique and attractive to young people and, with over three years to go, they have already captured the imagination of the people of Buenos Aires.

“We are impressed with the extent to which Buenos Aires 2018 has embraced Agenda 2020 and is already implementing 13 of the recommendations in its preparations.

"We look forward to our next visit when the team will be into the planning phase and we start to see this vision become the reality.”