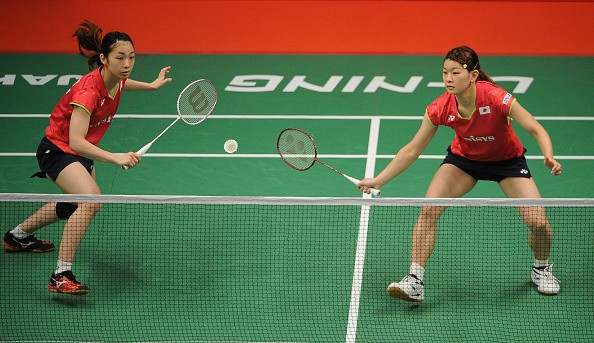 The Japanese duo fell to a 21-15, 12-21, 21-14 defeat as Anscelly and Cho booked their place in the quarter-finals, where they will face home favourites Nitya Krishinda Maheswari and Greysia Polii.

There were even more surprises in the evening session which saw China’s Luo Ying and Luo Yu, the number two seeds, edged out by Japan’s Naoko Fukuman and Kurumi Yonao, and sixth-ranked compatriots Ma Jin and Tang Yuanting outplayed by South Korea’s Yoo Hae Won and Go Ah Ra.

Further disappointment for China came in the women’s singles as Olympic champion Li Xuerui, twice a runner-up at the World Championships, was beaten by India’s PV Sindhu.

Li managed to draw herself level after Sindhu had taken the opening set, but was unable to complete the turnaround in the third and lost 21-17, 14-21, 21-17.

"It is good to come back from the injury and beat a top player," said Sindhu.

"I had the foot injury in February - it took me four months to recover.

"Today it was a long match.

"The shuttle was fast and we were not able to judge it, so we tried to play a controlled game.

"I have two bronze medals from World Championships; this time I hope to get a better one."

The men’s singles went more to form, however, with top seed Chen Long of China booking his place in the quarter-finals along with second seed Jan O Jorgensen of Denmark, Japan’s Kento Momota and Hong Kong’s Ng Wei.

As for the mixed doubles, number 11 seeds Praveen Jordan and Debby Susanto of Indonesia won 22-20, 19-21, 23-21 against number five seeds Joachim Fischer Nielsen and Christinna Pedersen of Denmark in one of the most eye-catching results.