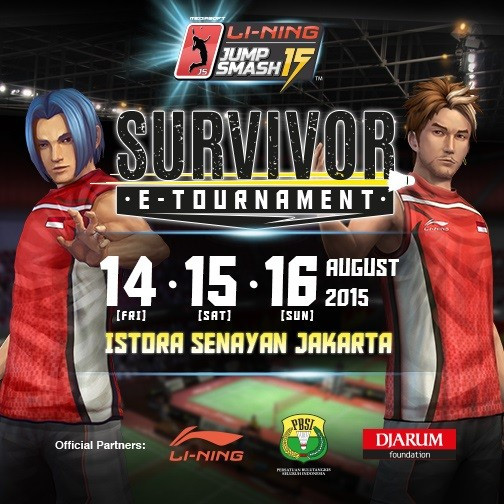 The Badminton World Federation (BWF) are inviting fans to take part in a "Li-Ning Jump Smash e-tournament", which will run alongside the Total BWF World Championships in Indonesia's capital city Jakarta.

Sporting goods brand Li-Ning are working together with Mediasoft Entertainment to provide spectators at the World Championships, due to take place from August 10 until 16, the opportunity to take part in the interactive tournament in the Istora Senayan arena.

By allowing fans to participate in the tournament, the BWF are hoping to build further excitement and momentum for the sport, with spectators being able to get involved in virtually playing and potentially winning a championship of their own.

The Li-Ning Jump Smash game is 2015’s top selling badminton game, having been downloaded over six million times and is available worldwide on both iOS and Android mobile devices.

Fans will be able to play as some of their favourite players with China’s Chen Long, India’s Srikanth Kidambi, Indonesia’s Markis Kido and Singapore’s Derek Wong all featured in the game, which combines state-of-the-art gameplay with an intuitive gameplay model to mimic real-time badminton movements.

The game will be available for fans to play for free for all six days of the World Championships, ahead of the tournament set being played in the final three days, with fans able to compete for prizes worth IDR13,500,000 (£650/$1,000/€900).

“The environment around the tournament is vital,” said BWF President Poul-Erik Høyer.

“It’s about having a very cheerful time on the spectator seats.

“That will happen for sure, that’s what Indonesia is capable of delivering, and it helps the players lift their game and it helps us present ourselves at the highest level.”

While fans will be competing in the interactive tournament, competition will be fierce on the court, with the world’s elite players bidding for world titles as well as ranking points for the Rio 2016 Olympics, which are also due to be up for grabs.

“I can see that there are many good matches and I’m looking forward to being there as a fan and as a spectator,” Høyer said.

“There are some tremendous matches from the first day.

"There will be disappointments, but also a lot of joy.”