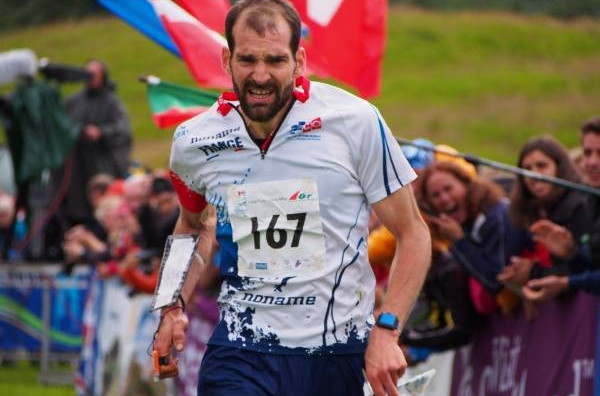 Thierry Gueorgiou of France powered to his 13th International Orienteering Federation (IOF) World Championships gold medal with a hard-fought victory in the men’s long race on the final day of the event in Scotland.

Gueorgiou made a couple of uncharacteristic mistakes during the 15.5 kilometres race through the Highland wilderness of Glen Affricbut was still able to hold off nearest challenger and middle distance gold medallist Daniel Hubmann of Switzerland with a time of 1 hour 49min 46sec.

The result gave the 36-year-old Frenchman his third consecutive long race title as he, Hubmann and Lundanes all earned a podium spot for the second successive World Championships.

“My performance wasn't brilliant, but technically I was okay, and during my run I just kept thinking, 'One step at a time, and you will reach the finish!'” Gueorgiou said.

Gueorgiou did not have it all his own way, though, as he lost around 45 seconds on control 4 and Hubmann, who ended the competition with two gold medals, managed to keep pace through large parts of the race.

Alongside eventual bronze medallist Lundanes, he took a slightly quicker route through control 13 and threw himself into contention for the title as his time for this section was more than a minute faster than his rival.

That gave Hubmann the lead for the first time which he held up until control 26, where an error handed the initiative back to Gueorgiou, lead he was never to relinquish.

In the women’s race, Ida Bobach capped off a superb World Championships for Denmark as she claimed her maiden gold medal at this level with victory over the 9.7km course.

The Dane largely controlled proceedings throughout and although she only posted the quickest time in two of the 20 legs, her consistency earned her top spot on the podium as others around her faltered.

“I pushed really hard but I was in control the whole way round.”