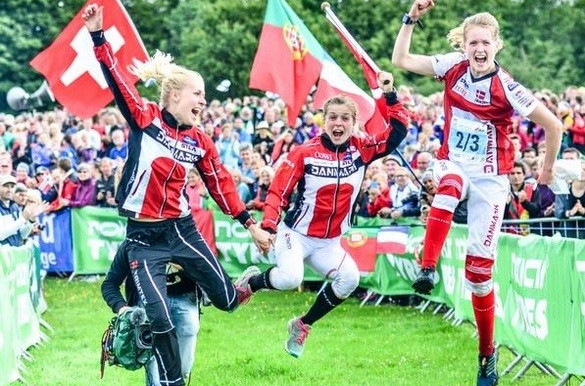 The trio of Maja Møller Alm, Ida Bobach and Emma Klingenberg clocked a time of 1 hour 49min 06sec to secure a historic success for their country.

The battle for silver also provided a great deal of excitement for the vocal crowd in Scotland as Norway edged Sweden to second place by a narrow nine second margin.

The result continued Denmark’s impressive performance at the World Championships after their gold medal in the mixed sprint relay last Saturday (August 1) and Alm’s triumph in the individual sprint the following day.

“While I was out there I couldn't believe I was running for a gold medal,” Klingenberg said.

Alm gave the Danes the perfect start by leading from the front, producing an excellent performance to give her country a one-minute lead advantage by the end of the first lap.

Bobach was then able to extend their lead by three minutes on the second lap as the Danish women capitalised on mistakes from the rest of the field.

That left Klingenberg with the chance to seal a commanding victory for her team and she took it in style to ensure they topped the podium ahead of their Scandinavian rivals.

In the men’s race, Switzerland took gold as the team of Fabian Hertner, Daniel Hubmann, Matthias Kyburz crossed the line in a total time of 1:41:40 to secure the title in front of Norway, winning their second silver of the day, with France coming through to clinch third.

Hertner seized the advantage in the first lap, despite a strong challenge from Yannick Michiels of Belgium, who narrowly missed out on a sprint medal, before the Belgian took an unconventional route which cost him precious time.

Switzerland then managed to increase their lead to 90 seconds thanks to Hubmann, winner of the middle distance race yesterday, continuing his superb recent form to hand Kyburz the opportunity to see his nation home.

The Swiss was rarely troubled in the final lap as he led his team to their fifth World Orienteering Championships title.

“It was incredible,” Kyburz said.

“Even though I went out with such a big lead, I was really nervous at the start, so I was always thinking, ‘We have to do it’, and we did it!”

The event in Scotland is due to continue on Friday (August 7) with the men’s and women’s long races through the remote Highland wilderness of Glen Affric.