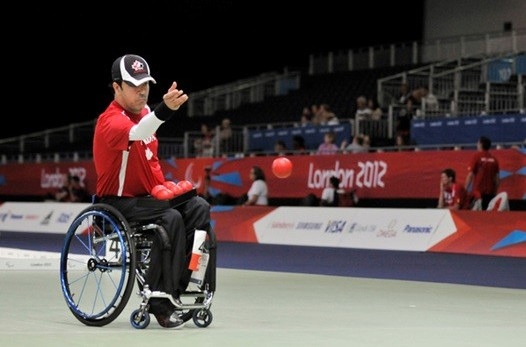 Paralympic boccia bronze medallist Marco Dispaltro will be the Flagbearer for Canada at the Toronto 2015 Parapan American Games, it has been announced.

The 47-year-old partnered now retired Josh Vander Vies to third place at London 2012 in the BC4 doubles event and also won individual silver at the 2011 Parapan American Games in Guadalajara, Mexico.

The Ceremony is due to take place tomorrow at the Pan Am/Parapan Am Athletics Stadium at York University on Friday.

“I feel very humbled and honoured to join the ranks of many great men and women who have been Canadian Flagbearers,” Dispaltro said.

“When I think of the journey that led me to this moment, I can't help but think of all the people that were instrumental, in making this moment a reality.”

Dispaltro entered the 2015 ranked at number one in his classification and Canada are hoping he can lead the team to gold on home soil during the boccia competitons.

His appointment as Flagbearer for the Opening Cermeony was hailed by Canada's Chef de Mission Elisabeth Walker-Young, who hopes the boccia star’s spirit will help inspire the rest of the team.

“We are very excited to have Marco as a Flagbearer for our Parapan Am Games team,” she said.

“Marco is a true ambassador of the Paralympic values and has been a role model to so many over the years.

“His spirit and competitiveness will resonate throughout the team.”

Canada are targeting a top three finish at this year’s Parapan American Games and Canadian Paralympic Committee President Gaetan Tardif claimed the team are ready to deliver their most successful Games yet.

“Led by Marco we are ready to amaze the country and show how tough our Parapan Am team athletes are,” he said.

"Every sport will have an impact on 2016 Paralympic Games qualification and our athletes are primed to perform at their highest level.”

Earlier this week, the CPC revealed they would be sending their largest-ever Parapan American Games team, with 216 athletes set to compete in Toronto.

Boccia is one of 15 sports at the eight-day event, which is due to come  to a conclusion with the Closing Ceremony on August 15.