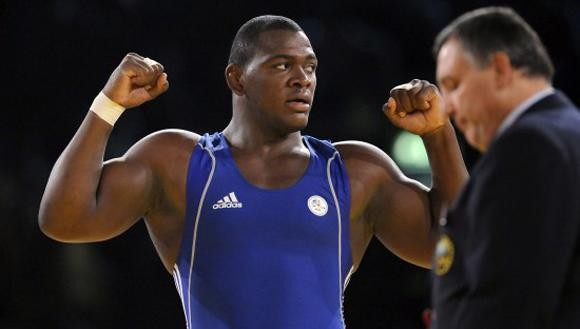 Mijaín López became only the third wrestler in history to win four Pan American Games gold medals after the Cuban superstar delivered a masterclass in the men's under 130 kilograms Greco-Roman wrestling final today.

Lopez's outstanding career has included five world titles and Olympic golds at both Beijing 2008 and London 2012, but the 32-year-old was bidding to become a Pan American Games great and join his fellow Cuba's Hector Milian and Juan Maren as the only athletes to seal four wrestling titles at the Games.

He showed no sign of nerves in the opening stages of the bout with Chile's Andrés Ayub as he cruised into an 8-0 advantage in the opening period, which he then maintained to clinch write his name into the record books.

Lopez was not Cuba's only success in the Mississauga Sports Centre as Yasmany Lugo overcame Honduras' Kevin Mejia 4-0 in the men's under 98kg Greco-Roman final, while Yakelin Estornell took silver in the women's under 58kg freestyle division after a 6-5 defeat to Brazil's Joice Souza.

America's success on the sixth day of the Games, though, was mostly found at the CIBC Pan Am/Parapan Am Aquatics Centre and Field House as they scooped four of the five swimming gold medals on a night filled with records and dramatic disqualifications.

The Canadian crowd had been sent into raptures by the performance of Emily Overholt in the women's 400m individual medley as she touched home for gold, only to be disqualified as she was deemed to have non-simultaneously touched the wall during the event.

This meant America's Caitlin Leverenz was elevated to gold in a Games record time of 4min 37.74sec.

Drama was not over as in the corresponding men's race Brazil's Thiago Pereira, seeking a 22nd Pan American Games medal, also fell foul of the same rule as Overholt after winning the race, with his team-mate Brandonn Almeida being awarded gold in 4:14.47 after an appeal was rejected.

US swimmers were the stars of the evening, however, as Giles Smith and Kelsi Worrell set Games record times of 52.04sec and 57.24 to win gold in the men's and women's 100m butterfly events.

The quartet of Courtney Harnish, Gillian Ryan, Kiera Janzen and Allison Schmitt took six seconds off the Games record by winning the 4x200m freestyle relay in 7:54.32.

Their success in the evening saw the US close on Canada's lead in the medals table but the hosts had enjoyed a superb first day of track cycling in which they secured the two gold medals available.

Hugo Barrette, Evan Carey and Joseph Veloce had qualified fastest for the men's team sprint final in the morning session but were forced to come from behind to beat Venezuela in the gold medal ride, as they secured victory in a time of 44.241 at the newly-constructed Milton Velodrome.

“We wouldn’t have had a good chance at winning if not for the Velodrome and all the staff around us,” said Barrette.

“We’ve been second to Venezuela for four years in a row, and now we come to the Games and we’re able to nail it.

"The only change is the home base so I attribute a lot of our success to this."

Less than an hour had passed before the home crowd were celebrating again as Kate O'Brien and Monique Sullivan replicated the achievement of the men's team by posting a time of 33.959 to beat Cuba's Lisandra Guerra and Mariles Mejias in the women's team sprint final.

The second day in the velodrome present the prospect of more Canadian success as they will begin as favourites to win the women's team pursuit final against the US, while Rémi Pelletier is well placed to challenge for a medal in the men's omnium after three of the six events.