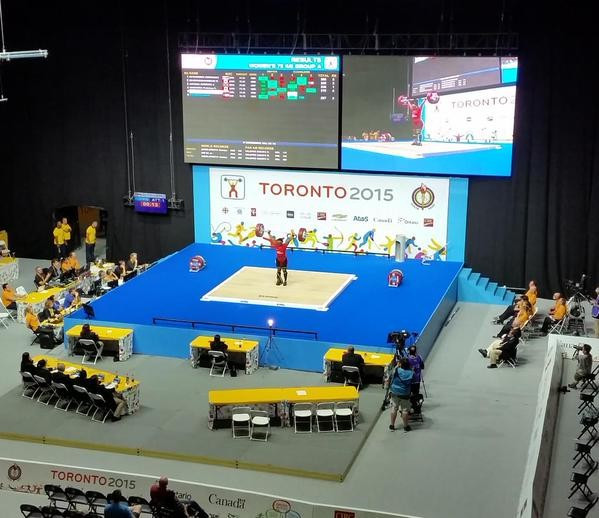 Cuesta first claimed the title back in 2003 at Santo Domingo in the Dominican Republic and, after successfully defending it at Rio 2007 and Guadalajara 2011, was clearly the woman to beat here today.

The defence of her title never seemed in doubt after her snatch lift of 112kg put her seven kilograms clear of her nearest challenger, Brazil's Jaqueline Antonia Ferreira, before she ensured victory with a successful clean and jerk lift of 135kg.

Having sealed gold, the 33-year-old turned her attentions to extending her clean and jerk Pan American Games record of 138kg by adding another kilogram to that total, while a successful lift would also see her surpass her total score of 250kg from Rio 2007.

She was unable to complete the lift, however, and settled for her overall total of 247kg, but this proved more than enough to retain her crown ahead of Fernanda Valdes of Chile and Ferreira, who finished with totals of 231 and 230kg respectively.

An eighth Colombian weightlifting gold was secured by Leidy Yessenia Solis Arboleda, a class above the rest of the field throughout duration of the women's 69kg event.

She posted a Games record snatch lift of 111kg to hold a comfortable lead at the end of the first discipline.

Having opted to begin the clean and jerk event at 130kg the 25-year-old was left to watch her competitors complete their lifts and, despite the knowledge the weight would be enough to secure gold, she opted to take on the higher weight of 132kg to set another record.

Arboleda backed up her confident approach by setting the record in each of her three clean and jerk lifts, with the final weight of 145kg giving her a total of 256kg, well clear of Neisi Dajomes Barrera of Ecuador and Mexico's Aremi Fuentes, who lifted 225 and 223kg each.

“The competition was great, I’m very happy and content with the outcome," Arboleda said.

"Doctors told me that I would never lift again due to complications during childbirth.

The final gold medal of the penultimate day of weightlifting was won by the United States Kendrick Farris after he saw off the challenge of compatriot Norik Vardanian in the men's 94kg competition.

Farris had lifted three kilograms more than Vardanian in the snatch event and extended his lead in the clean and jerk by lifting 203kg to end the competition with 336kg in total, while Vardanian's lift of 202kg saw him finish on 362kg overall.

Cuba's Javier Vanega secured a bronze medal having lifted a combined total of 361kg across the two disciplines.