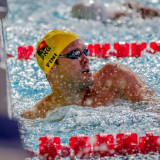 As a gentle drizzle swirled over the outdoor pool, Pini proved far too strong for the rest of the field in the 50m butterfly as he clocked 23.93sec, beating his own record by 0.46 seconds.

On a dramatic evening of action at the brand-new Taurama Aquatic Centre, where three Games records were broken, Pini certainly lived up to his “super fish” nickname as he was able to come from behind in the relay race to earn yet another gold for the hosts at Port Moresby 2015.

He hauled back the deficit his side faced and he then fended off a late surge from Fiji to help his team, which also included Sam Seghers, Anna-Liza Mopio-Jane and Savannah Tkatchenko, to an overall time of 1:40.02, which sent the jubilant crowd into delirium.

The result gave the 33-year-old, who plans to retire after the conclusion of the Games, his fifth gold medal at Port Moresby 2015.

Fiji held on for silver while New Caledonia, who enjoyed another fruitful evening with three golds in a total haul of seven, came through to take bronze.

Formidable New Caledonian Lara Grangeon was nailed on for the women’s 800m freestyle title and she dealt with the usual expectation by breaking the Pacific Games record with a time of 8:52.99, nearly 13 seconds quicker than her previous best.

The 23-year-old now has six gold medals to her name at these Pacific Games and it is likely she will add a few more before the swimming competitions come to an end on Saturday (July 11).

Fiji’s Matelina Buadromo was second and Grangeon’s teammate Charlotte Robin, who won the women’s triathlon on Sunday (July 5), was third.

Another New Caledonian swimmer in record-breaking form was Adeline Williams, who breezed to a confident triumph in the women’s 100m breaststroke in a time of 1:11.05, comfortably beating Pilar Shimizu of Guam and Papua New Guinea’s Tkatchenko.

New Caledonia’s impressive display was rounded off when youngster Emma Terebo took the women’s 50m butterfly honours in what provided the closest finish of the evening.

Terebo narrowly edged out Caroline Puamau of Fiji by 0.17 seconds, clocking a time of 28.44, while Buadromo took bronze.

Amini Fonua sealed a hat-trick of gold medals at the event by winning the men’s 200m breaststroke and he remains the only Tongan athlete to have earned a spot on the podium at the Pacific Games so far.

The New Zealand-born swimmer claimed victory with a time of 2:20.27 ahead of Papua New Guinea’s Ryan Maskelyne and Guam’s Benjamin Schulte, who then went on to clinch gold in the men’s 200m individual medley in 2:09.12.

The 19-year-old was pushed all the way by Thibaut Mary of New Caledonia, who had to settle for silver, while Mary’s teammate Emmanuel Limozin was third.