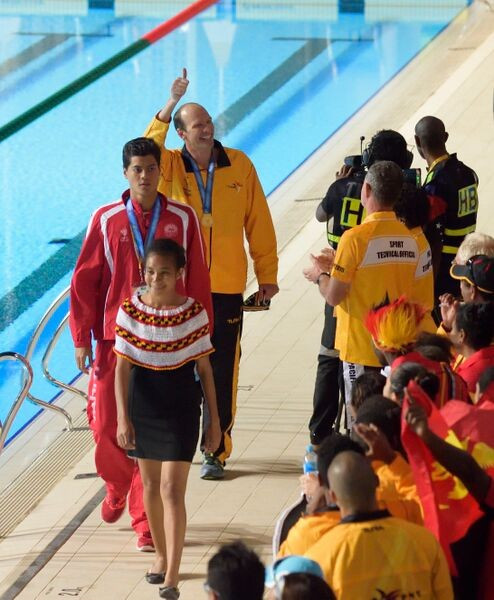 Commonwealth Games gold medallist and red-hot favourite Ryan Pini of Papua New Guinea secured a gold medal in the men’s 50 metres backstroke to the delight of the raucous crowd as four Pacific Games records were broken on the opening day of swimming here.

Pini, a multiple Pacific Games champion, who won the Commonwealth Games 100m butterfly in Melbourne in 2006, had the weight of the nation on his shoulders going into his race but delivered under pressure, taking the title in 26.14sec.

His time was some way off his best but enough to beat Teiki Dupont of Tahiti, who set the tone for an excellent evening for his team with silver, while New Caledonia's Julien-Pierre Goyetche came through to clinch bronze.

Lara Grangeon was also in good form as the swimmer from New Caledonia, winner of an incredible 16 golds on home soil at last Pacific Games in Nouméa four years ago, got her campaign off to the best possible start by winning double gold in Games record times.

The 23-year-old left the rest of the field in her wake in the 400m individual medley, finishing in 4min 47.07sec, comfortably ahead of both Matelita Buadromo of Fiji and compatriot Lou Pujol.

She was then part of the victorious New Caledonia team, alongside Lea Ricarrere, Arnelle Hidrio and Emma Terebo, which powered to gold in the 4x100m freestyle relay in 3:55.00.

The final individual race also produced a Games record as Tonga’s Amini Fonua edged Guam’s Benjamin Schulte in the men’s 100m breaststroke in the closest finish of the evening.

The duo, alongside Rainui Teriipia-Rentier of Tahiti, were locked in a three-way battle but Fonua had enough left in the tank for a late burst that gave him victory in 1:02.95 and Schulte held off Teriipia-Rentier for silver.

The New Zealand-born 25-year old’s performance saw him reign triumph despite the lack of swimming facilities in his adopted nation, due to host the 2019 Pacific Games.

Another swimmer at the double was Rahiti De Vos, leading led a one-two for Tahiti in the men’s 200m freestyle with a time of 1:51.87, beating Hugo Lambert to gold.

De Vos was then part of the men’s 4x100m relay freestyle team, alongside Stephane Debacre, Anthony Clark and Lambert, that set a Games record 3:32.00.

Elsewhere, New Caledonia’s 16-year-old Terebo finished the day with two golds thanks to a classy display in the women’s 100m freestyle, clocking 57.46, while Buadromo had to settle for her second silver as Caroline Puamau, also from Fiji, won bronze.