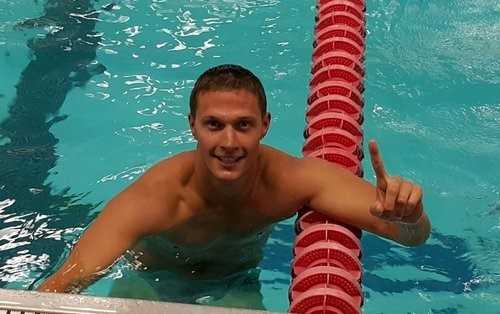 The United States’ Logan Storie failed to qualify for the men’s individual final at the International Modern Pentathlon Union (UIPM) Senior World Championships in Berlin, despite setting a world record time in the swimming.

Storie swam the 200 metres in 1min 53.08sec, a performance that bettered his own previous record set during the first stage of this year’s UIPM World Cup in Sarasota by 0.64 seconds.

But a 26th place finish in both the fencing and combined run/shoot event saw him finish 29th out of 30 competitors in qualifications C and miss out on a place the final on Friday (July 3).

British trio Nick Woodbridge, Jamie Cooke and Joe Choong are also in contention, the former looking to better the silver medal he won in 2013.

Double Olympian Woodbridge, who turned 29 today, was gifted the perfect birthday present after finishing fifth in qualifications B.

Having made his first World Cup appearance for two years in April after a hip injury, it marked a significant result for him.

“I had a good start in the fence and from there my day was always going to be more comfortable,” said Woodbridge.

“My swim time was slightly slow for me and I am hoping to take a couple more seconds off that in the final.

“I had a bit of a sketchy first shoot but I only missed one shot in the remaining three targets, which meant that qualification was in the bag.

“I don’t want to put any pressure on myself for the final but I hope to gain some confidence after a difficult 18 months and secure some good Olympic qualifying points.”

Choong, 20, made a fantastic come back from injury after securing a place in the final for a second year in a row.

An extraordinary display of athleticism and precision saw Choong climb his way up the table in the final event to finish qualifications B in ninth, one place outside automatic qualification.

Cooke, meanwhile,  had a strong start to the day after winning 17 of his fencing bouts and coming second in the swim.

Cooke finished 1ualifications C in 12th position securing his place in the final with 1,131 points.

The women's qualification is due to take place tomorrow.